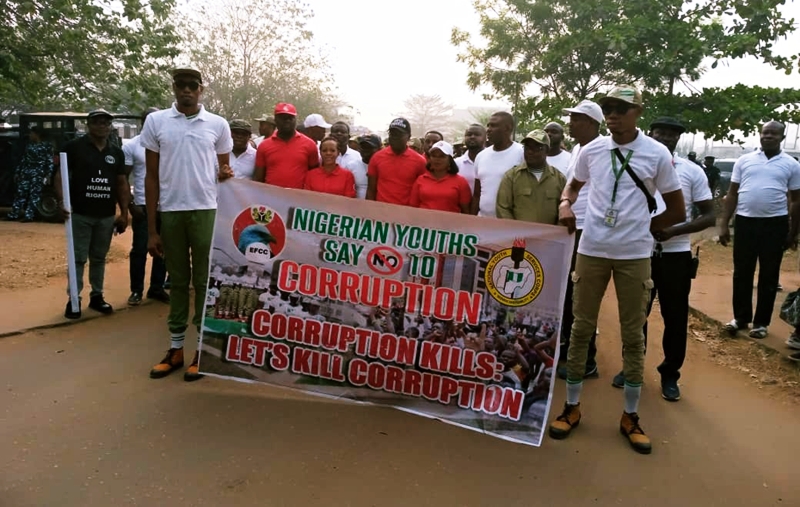 Asaba, the capital of Delta State was Friday, February 14, 2020, agog as corps members filed out in their multitude to sensitize the public on the ills of corruption and its devastating effect on our society.

The exercise which commenced from the Federal Secretariat through Interbau roundabout and back to the Secretariat, witnessed massive turnout of corps members and their NYSC officials, EFCC officials and other security agencies, including the Commissioner and officials of the Delta State Ministry of Youth Development, to participate in engaging the public on the nationwide campaign against corruption.

Addressing the press during the 10 Million Man March against corruption in the State, the Commissioner for Youth Development, Comrade Ifeanyi Egwunyenga said, the exercise was a thoughtful one to enlighten those who were not yet in the know to know that corruption would never do us good as a nation.

He said that Delta State Government saw it as a programme of interest, believing it was a right step in the right direction, especially with the active engagement of the youths.

Egwunyenga posited that such initiative should be a continuous one, driving it through various strata of the society, with the right thinking towards positive mindset and value reorientation.

On his part, the Area Coordinator, South-South NYSC, Mr Omotade Ayodele Benjamin said, the idea of the walk against corruption was to assure the Federal Government that the NYSC was in partnership with it on the fight against corruption, believing that the youths could play critical roles in eliminating corruption from our national and personal lives.

He affirmed that this was just the first step, and that subsequently, the fight would be taken to every nook and cranny of the Nigerian society until the message becomes total.

Meanwhile, the Delta State Coordinator of NYSC, Mrs. Olutayo Samuel believes that corruption had eaten deep into the fabrics of our national life, creating unemployment amongst the youths and depriving them of productive opportunities in life.

She maintained that if the youths did not demand for an end to corruption, their lives would perpetually remain in jeopardy.

According to her, “The best people to use for this fight are the youths. That is why this programme can only be a success if the youths are adequately engaged to sensitize the society, to understand that the future of the youths is at stake with corruption. And of course after this time out, this campaign will be sustained through deliberate and conscious effort to bring corruption to a zero level under the platform of NYSC, EFCC Vanguards”, she said.

Moreover, the representative of the EFCC Chairman and Zonal Head, Legal and Prosecution, Mr Aso Larry Peters was optimistic that corruption could be tamed, if and only when the youths get involved.

He affirmed that the whole essence of the programme was to engage Nigerian youths through the NYSC as anti corruption ambassadors, believing they could become beneficiaries after serving their country.

His words, “The reason graduates don’t get jobs to do after serving their country is because a few Nigerians in power will grab every opportunity, leaving the children of the poor at their mercy. It will continue if the victims refused to act or fight against the national menace.

“Meanwhile, the youths will remain a key to the success of anti corruption if they are encouraged as ambassadors and whistle blowers. The time is perfect for them now, with the use of the social media which makes the war on corruption easier to prosecute. If they joined us, together we will be changing the narrative. Their fight won’t be in vain, because they will own the fight and will be fighting for their future. By so doing we would have put an end to corruption seamlessly”, the EFCC boss explained.