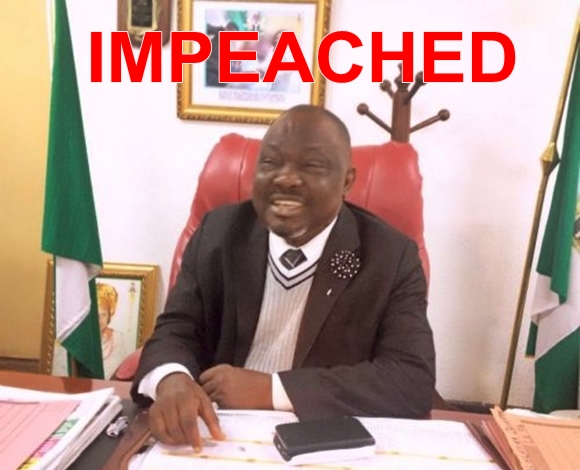 There was pandemonium at the hallow chamber, Edo State House of Assembly today following the impeachment of the Speaker, Hon. Justin Okonoboh over alleged gross misconduct and abuse of office.

Monday plenary siting which kick started after the roll call of members suddenly turned into a theater of war by some members loyal to the impeached speaker in a bid to resist the impeachment.

All Progressives Congress (APC) member, Emmanuel Agbaje, Akoko- Edo II  moved the notice of impeachment endorsed by 16 out of the 24 members of the Assembly.

The newly elected speaker told newsmen that 16 members impeached the three principal officers, adding that soon after the impeachment the number rose to 19.

He said the impeached principal officers have been suspended for three months as well as the member representing Esan North East 2, Magnus Ezehi-Igbas.

Adjoto accused the impeached speaker of running the house as a private concern in conjunction with his wife and children.

“The impeached speaker converted the house to a private estate. We are supposed to be 24 members in the house but he now co-opted his wife as 25 members who was now privilege to know all the operations before the members.

“He also awarded contracts to his personal self without recourse to the house standing rules and due process”.

But in a swift reaction Hon. Justin Okonoboh described the action of the lawmakers as illegal, saying he remains the speaker of the House.

Mean while efforts by Edo State Governor, Mr. Godwin Obaseki to make the law makers rescind their decision has failed as the Parliamentarians insist on the impeachment of Hon. Okonoboh.

The Governor held a closed door meeting with APC law makers in the House and other party leaders at the State Secretariat of the party in Benin City, Monday evening.

Briefing news men on the outcome of the meeting, Chairman of APC in the state, Hon. Anselm Ojiezua said the leaders of the party are discussing with the law makers with a view to resolving the matter promising that the party will issue a statement once it is resolved.

“We hope we shall resolve the issue very soon. That’s all we can say now. We are discussing, when we resolve, we will issue a statement,” Ojiezua said.

However, the new speaker, Hon. Kabir Adjoto who came to the meeting with the full compliment of the speaker denied comments saying” my chairman has spoken”.