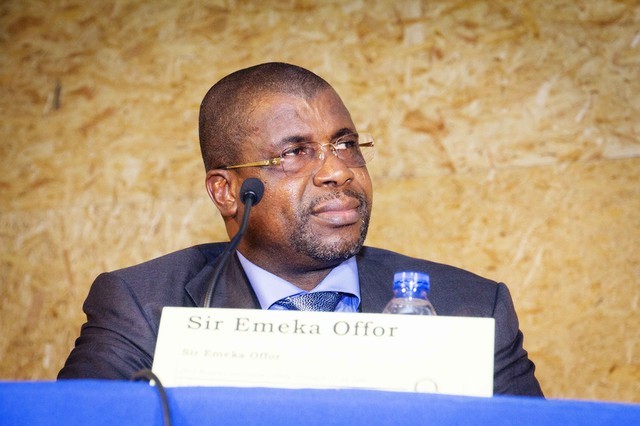 Anambra State born oil magnate, Chief Emeka Offor has warned pickpockets to steer clear of the funeral of his father, Chief Bennett Offor that will hold this week at Oraifite, Anambra State.

He said security arrangements had been put in place to pick anybody who would misbehave on the occasion, warning that he will not spare anybody, including hoodlums who may like to embarrass his friend and well wishers that will attend the burial in any way.

Meanwhile President Muhammadu Buhari and American President-elect, Mr. Donald Trump and many other African leaders are expected to attend the funeral.

This was disclosed by the Vice Chairman of the Pa Benneth Offor Burial Committee, Mr. Tony Obi, while unveiling the burial plans Pa Offor who died in Febuary this year, at Emeka Okafor Foundation Centre, Oraifite, Anambra State.

According to Sir Offor, “my father served the Nigerian Police meritoriously and retired after 35 years of service, so nobody will be allowed to come here and mess up his funeral. Security arrangements have been put in place to deal with miscreants.”

“Pickpockets would often sew uniform and infiltrate the funerals of rich persons in the State and steal people’s valuables, including telephone and money, but we are waiting for them in Oraifite, that day may be their last that will land them in prison, to be fore warned is to be fore armed.”

Chief Offor said members of the National Assembly would be led to the funeral ceremony by the former Presidents of the Senate, Chief Ken Nnamani and Senstor Anyim Pius Anyim, while many people from all walks of life will have promised to come.