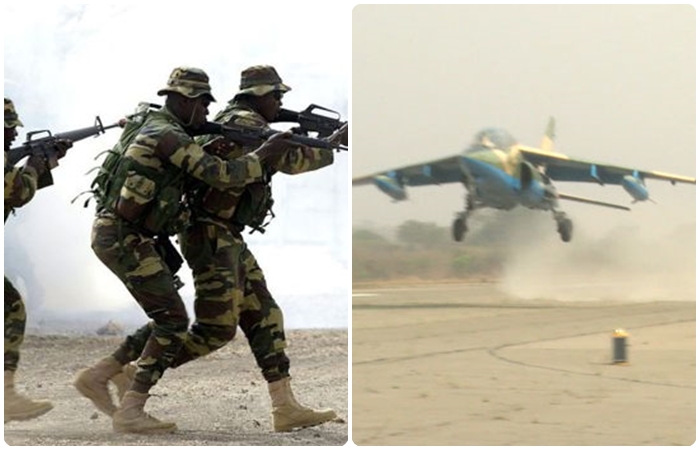 Senegalese troops have entered The Gambia in support of Adama Barrow, who was sworn in as president on Thursday after winning last month’s election.

A convoy of heavily armed Senegalese soldiers, in full battle dress, could be seen heading for the Gambian border.

They are backed by Nigerian air and naval power, as well as other troops from Ghana.

A Senegalese army spokesman, Col Abdou Ndiaye, told the BBC that the troops had encountered no resistance and were heading for Banjul.

He warned: “It is already war. If we find any resistance, we will fight it. If there are people who are fighting for the former president, we will fight them. The main goal is to restore democracy and to allow the new elected president to take over.”

But Gambian army chief Ousman Badjie said his troops would not fight Senegalese forces because the dispute was “political”.

“I am not going to involve my soldiers in a stupid fight,” he said. “I love my men.”

In his inaugural speech, President Barrow ordered all members of The Gambia’s armed forces to remain in their barracks.

Any found found illegally bearing arms would be considered “rebels”, he said.

Throughout Thursday, Nigerian fighter jets have been flying over Gambian skies while its newest warship has been stationed off the waters overlooking State House, the seat of power where Jammeh remains holed up since last month.

Another troop contributing country to the military expedition include Ghana which is providing some 200 combat troops.

Lamin Njie a resident of Lameng, a small town several kilometers from the capital Banjul told the African Press Agency that fighter jets have been flying overhead since the early afternoon.

Lameng is a few miles from the country’s only airport in Yundum, African Review reported.

Noting the same experience on his Facebook page, Kebba Sanneh a resident of Gambia’s biggest town Serrekunda wrote ominously: “This war is almost here…I can hear fighter jets hovering overhead fast as they circulate and disappear into the horizon towards the Atlantic. Call it warning but there is high probability that the skies over this little republic will be busy in the hours and days ahead…..”.

Although The Gambian military has no known fighter jets, there were reports of anti-aircraft guns being positioned in the approaches to major towns and barracks.