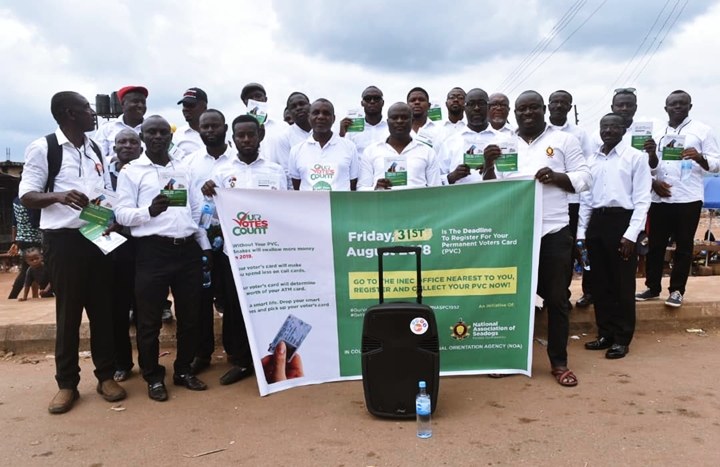 The National Association Of Seadogs International (NAS Int’l), Vito Corsica and Saxon Decks (Asaba/Agbor axis of Delta State Nigeria and Manchester on England), on Thursday 16th – Saturday 18th August, 2018, carried out an aggressive ‘Get Your PVC’ awareness/sensitization campaign in Agbor, Asaba, Illah, Ogwashi-uku and Okwe, all in Delta State.

The NAS roadshow and House to House ‘Get Your PVC’ Campaign led by its Vito Corsica Deck Cap’n, Mr. Oghenekaro Ukavwe, disclosed that NAS was poised to ensure that eligible voters in Delta State register and collect their PVCs to be able to exercise their civic responsibilities in the forthcoming general elections in Nigeria.

Mr. Ukavwe also revealed that the awareness campaign was targeted at every nooks and crannies of the State, especially in the rural areas, regretting that most of the dwellers were not aware of the on-going voters’ registration exercise, hence the prompt intervention by NAS.

Also speaking, the Saxon Deck Cap’n, Dr. Kola Durojaiye, noted that NAS International was determined to ensure that all eligible voters in Nigeria, who have not registered with the Independent National Electoral Commission (INEC) in the on-going voters’ registration exercise do so and collect their Permanent Voters’ Cards (PVCs) hence the ongoing nationwide campaign embarked on by NAS.

Dr. Durojaiye appealed to the good people of Delta State to support the sensitization exercise by passing the message to others in the overall interest of the Country.

Apart from the campaign jingles that was blasting in the airwaves of different Radio Stations and the open Van with the popular DJ, Dessert Storm (Sebastien Ikpoza) playing it to the hearing of all passersby, the roadshow campaign was so colourful and peaceful as the officers of the Federal Road Safety Corps (FRSC) were on ground controlling the traffic for the roadshow motorcade.

The NAS Int’l well-designed sensitization fliers/handbills which flooded most streets of Asaba and Agbor axis, especially the Delta State Capital Territory areas carried different inscriptions such as: “Your Voter’s Card Will Make You Spend Less On Call Cards, Your Voter’s Card Will Determine The Worth Of Your ATM Card, Live A Smart Life. Drop Your Smart Phones and Pickup Your PVC”.

Okowa Calls For Collective Efforts To Check Irregular Migration, Human Trafficking
2019: Uviejitobor Calls On Constituents To Reelect Him And Okowa For Sustained Development In Udu Constituency