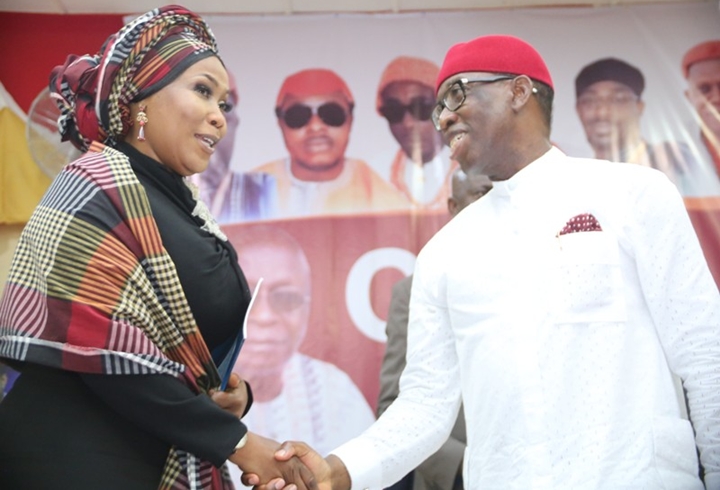 Delta State Governor, Senator Dr. Ifeanyi Okowa has said that there should be collective efforts to check irregular migration of Nigerians.

“Our parents gave us sound up bringing but, modernity is changing a lot of things; we will talk with Onu Ika to partner with the National Agency for the Prohibition of Trafficking in Persons (NAPTIP) to lead a campaign against human trafficking; everyone of us must agree that we must be agents of change, we must be ready to speak out when we see strange things happening in the land and I am confident that when everyone of us carry on with the campaign against human trafficking, there will be positive results.”

He continued, “our parents thought us that hard work pays, life is not about being on the fast lane; those who engage in trafficking are giving fake promises, they are involved in another form of 419; some people were made to sell their land to send their children out of the country through irregular means, whereas, such money when spent on good ventures, within the country can yield better results.”

“How can one spend so much money to go to war-torn Libya or go to Mali? Whereas, nationalities of such countries want to come to Nigeria; most of those trafficked are never made to know their true destinations, some people are even trafficked for their organs to be harvested or used for money rituals,” the governor said, adding, “unfortunately, some children we have trained and empowered with starters parks through wealth creation programmes, sold their starter parks to move to Libya and Mali and got stucked; we also thank God that a lot of those we trained and empowered are succeeding and have become role models to a lot of persons; there must be collective fight against irregular migration.”

While commending Onu Ika Nigeria for organising the annual event, the governor commended traditional rulers in Ika land for living in unity, stating, “when the traditional institution is united, the political institution will unite and things will be better for the people.”

He assured the people of his administration’s commitment to develop the state.

The Director-General of NAPTIP, Dame Julie Okah-Donli in a lecture titled “Mass exodus of youths and national development: A case of Nigeria-Libya-Europe migration trend,” stated, “the International Organisation on Migration (IOM) estimates that over ten thousand Nigerians are forced to work as prostitutes in Italy, many of them victims of human trafficking.”

“Delta State ranks third among source states of victims of human trafficking; after Edo and Kano States,” she said, adding, “the task of ensuring adequate protection of our children from trafficking and illegal migration rests on all of us, we must all rise up to support initiatives and efforts geared at making our country safe.”

Chairman of Delta State Traditional Rulers Council, HRM Emmanuel Efeizomor II thanked the organisers of the event for their steadfastness, observing that Ogwa Ika has become an agenda setting lecture for Ika nation.

He called for unity among the people, saying, “it is our duty to be our brother’s keepers and the unity of Ika nation must continue to be strengthened, Ika nation is so blessed and should continue to take its pride of place in Nigeria’s spcio-political scene.”

Dein of Agbor, HRM Benjamin Ikechukwu, Keagborekuzi 1, observed that the event was important for a people who shares “the same roots and a common historical experience to deliberate and celebrate the things that hold us together and make our bonds stronger, to share experiences and to chart new ways while reinforcing the old ways of bringing progress to our land and our people.”

Head, Collective Leadership, Onu Ika Nigeria, Mr Daniel Usifoh had in an address, said, the occasion was to discuss the past, present and future of Ika nation.