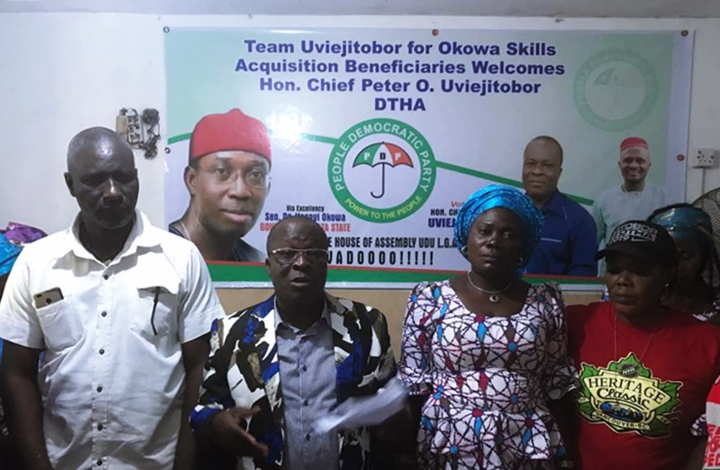 Hon. Uviejitobor who gave the charge at the graduation ceremony of batch B of Team Uviejitobor for Okowa Skills Acquisition Program, urged the people to work hard for the reelection of Dr Okowa for another term in office as a reward to his commitment for good governance and sustainable development across the state.

The Lawmaker at the brief ceremony which saw the graduation of another set of 50 participants, bringing the number of Udu Youths so far trained in Computer Appreciations under the scheme to 100, also solicited the support of the people to his reelection to the Delta State House of Assembly for a second tenure in the 2019 general elections. Hon. Uviejitobor stated “my reelection as a member of the state legislature and Okowa as the Governor of the state will consolidate on the achievements recorded thus far and bring greater sustainable growth and development to Udu Constituency”.

The Lawmaker explained “my sponsorship of the computer training program was part of efforts to address youth unemployment and poverty in the constituency. I therefore enjoin all of you the graduating students to use the knowledge acquired to establish yourselves”, adding that the third batch of the program will commence in early October.

Hon. Uviejitobor who is the Chairman, House Committee on Lands, Survey and Urban Development, expressed his continued desire to promoting ideals geared toward exposing youths of Udu constituency to computers and the use of essential softwares as well as teach them how technology can contribute to their social upliftment. “Access to computer technology and to the internet is an essential means of connecting and empowering people. Computer literacy is becoming as essential as literacy itself both in terms of ability to compete in the workplace and ability to access services and be fully empowered in the society. My vision is that Udu youths can never be found wanting in this regards”. The Lawmaker added.

While thanking the instructors and management of Ogolo Computer School, Ovwian for continuously ensuring that the participants are well trained, Hon. Uviejitobor assured that over 200 Udu Youths will be trained under the scheme before the end of his first tenure in the state legislature.

The Director of the Team Uviejitobor for Okowa Skill Acquisition Scheme, Comrade Ejiro Oniya, the PDP Woman Leader and Secretary, Udu local government Area, Mrs Ufuoma Edewor and Hon. King Omowhare, expressed appreciation to Hon. Uviejitobor for initiating the program, describing it as a laudable achievement which has made majority of Udu youths to be computer literate. In his remarks, the Director of Ogolo Computer School Ovwian, Evang. Emmanuel Ogolo thanked Hon. Uviejitobor for the skill acquisition Program, saying that the people of Udu Constituency are happy over the youth empowerment scheme.

He added that the instructors were taking additional time to teach the students how to make, manage and multiply money, stressing that participants were also enlightened on how best to use their PVCs, especially towards voting for Okowa, Uviejitobor and all other PDP candidates in the forthcoming elections.

Some the Participants who spoke during that Graduation ceremony, including Etuonoube Gilles, Ovudore Tobore, Bethel Onatomre and Benedicta William, also praised Hon. Uviejitobor for giving them the platform to success in life. They said the computer training was very revealing, and pledged their support for PDP and reelections of Hon Peter Uviejitobor and Governor Ifeanyi Okowa.

Hon. Uviejitobor promised starter packs for best graduating students in each of the four batches at the end of the computer training program.