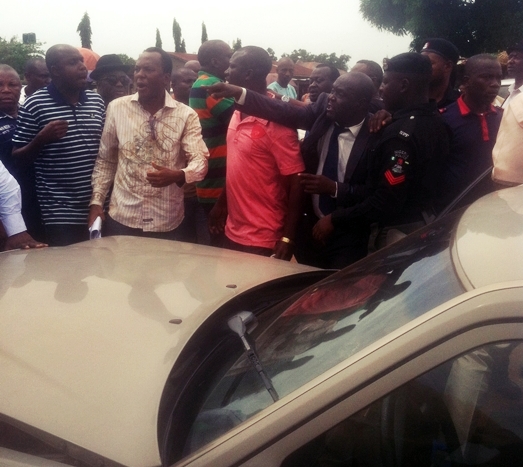 Journalists from across the state who gathered in their hundreds at Labour House, Asaba, venue of the election, were stunned at the presentation of a ‘Doctored Delegate List’ purportedly prepared to be used for the voting process.

Spotting the perceived rigging template and disenfranchisement of potential voters as evident in the disclosed delegate list, pockets of protests sprang forth with a call to use the previous published compendium of the 2015 edition as against the new list processed for the election.

Waves for the use and against of the voter’s list grew stronger as it gradually generated to an atmosphere of disorder and total collapse of the process.

The brewing lawlessness was swiftly laid to rest by the electoral officer from the national headquarters as he announced the Union’s decision to postpone the election.

Following the postponement of the Election, a five (5) man caretaker working committee has been set up to manage the affairs of the Union for the next three months.

In a Press Statement titled ‘Aborted NUJ Delta State Council Election’ made available to the Union members by the Senior Assistant National Secretary, Gbemuga Bamidele, he stated that the committee will run the affairs of the Union and conduct fresh elections within three months and prayed for understanding and cooperation of all members.

“Consequent upon inability to conduct the election for members of the State Working Council (SWC) of Delta State NUJ as scheduled on April 20 2017, a five (5) man Caretaker Committee has been inaugurated in accordance with Article 5C(9c) of the Constitution of Nigeria Union of Journalists (NUJ).

The Caretaker Committee were elected from a meeting of thirty-five (35) Chairmen and Secretaries of sixteen (16) Chapels of NUJ in Delta State.

The Caretaker Committee shall take over and run the affairs of the Union and conduct fresh elections within three (3) months as stipulated in the NUJ Constitution.”

It will be recalled that the Delta State NUJ Election which was first slated to hold on April 18, 2017, was rescheduled for the 20th in order to accommodate and address issues of aspirants and candidates but the process crumbled due to power play orchestrated by internal and external forces..