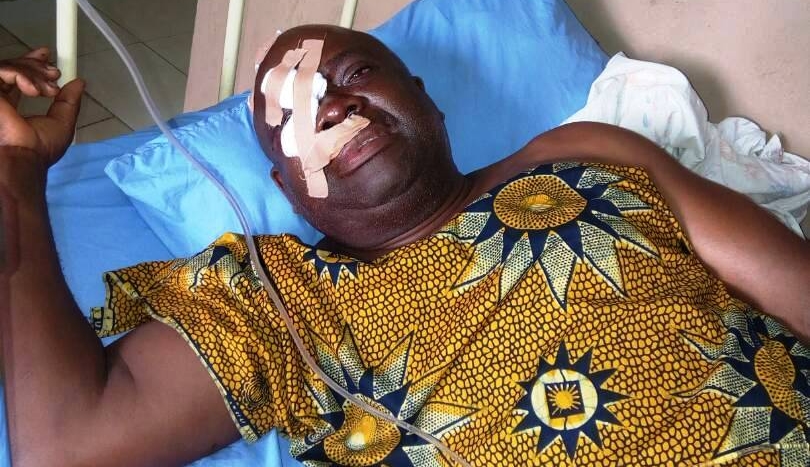 The alarming level of insecurity in Edo State has continued to create worries for the people as what started like a normal day on Monday ended in an awry form for a freelance photo journalist in Edo State, Lucky Agie as he was attacked by suspected armed robbers on his way home from work on Monday when he boarded a taxi along Akpakpava Road in Benin City.

He was attacked with dangerous objects, pummeled and thrown out of the vehicle into a valley after being dispossessed of his belongings including his camera worth over N400,000, ATM card, identity cards and cash.

A good Samaritan rescued him to a private hospital where he is currently receiving medical treatment.

Narrating his ordeal to journalists in pains at the private hospital with a heavily bandaged right eye and stitched head with a swollen face, Agie who recently retired from the state owned Nigerian Observer before taking the freelance work with The Sun he said; “I watched the first half of the Cameroun – Nigeria match at the NUJ Press Centre and wanted to go home, I tried to start my car but it could not even after colleagues helped me to push. I now decided to go by public transport and I was dropped off at Akpakpava where I entered a taxi, an Audi 80 painted in the state taxi colours. Some passengers were inside include a lady and that gave me the courage to enter because I am always wary not knowing that the lady was part of the gang. I flagged him down that I am going to Ewa Road junction, I immediately paid the driver when I entered and he said he doesn’t have change. One of the passengers behind gave him N100 and he added N50 which he gave to me as my change. Just by Second Junction, near Total Filling Station, one of the passengers alighted and another entered who now sat with me in the front seat and immediately the driver drove off, they started beating me and hitting me with objects that injured my head and my eyes trying to strangulate me with my shirt which they tore.

“After they drove off, I was able to struggle out of the valley and tried to waive passersby to me until a ‘good samaritan’ came and took me in his taxi to this hospital. I was only able to remember my elder brother’s number who is based in Abuja. I was able to call him and he now reached my people in Benin who now came to me. I have told my younger brother to report the case in the police station.”

Shortly after leading some members of the Edo NUJ to visit him, chairman, Edo State Council, Sir Roland Osakue called on security agencies to check the spate of robberies and killings in the state as he said the attacks especially against journalists is becoming alarming.

Many journalists Benin residents have been robbed and some escaped by whiskers in various parts of the state capital. Worst hit are Ekenwan road, Airport road, Oluku and others.

It would be recalled that just few weeks ago, a journalist with NTA Benin, Lawrence Okojie by gunmen few metres from his house after close of work.