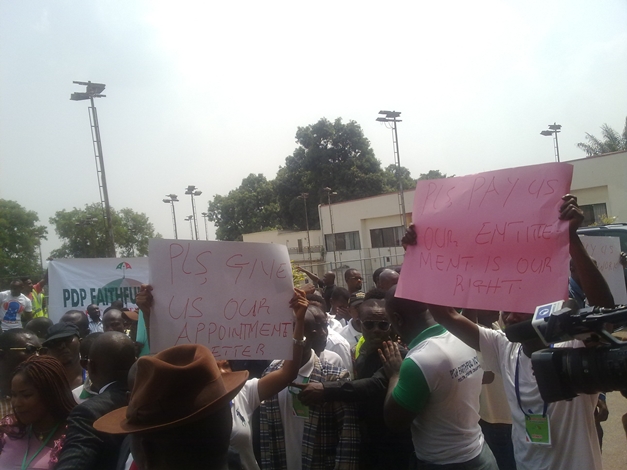 The Delta State Anti-Corruption Summit organized by the state government on Wednesday to showcase its financial prudence, suffered a setback when political thugs alleged to be members of the Peoples Democratic Party (PDP), took control of the vicinity.

The youths under the aegis of the PDP FAITHFUL YOUTHS, stormed Grand Hotel Asaba, venue of the one-day Summit to compel the state governor, Dr. Ifeanyi Okowa to make good his promise to the youths he uses in all sorts of jobs.

The aggrieved youths who were on a peaceful protest carried various placards with the inscriptions: “Pay us our money”, “we have worked for the party”, “give us our appointment letters”, “please pay us we have worked for PDP”, “Please keep your promise, Governor Okowa”, said they are the ones used by the governor and other leaders of the party to ferment troubles but are being used and dumped, after each assignment.

According to them, “we were the ones whom were called upon by leaders of the party to chase out Senator Ali Modu Sheriff and Dr. Cairo Ojougboh from Grand hotel last week”.

They revealed to journalists that they travel around with party leaders to wherever the storm is, pointing out that when it comes to empowerment, appointment and other enumerations, they are side-lined.

The leader of the group, Mr Clifford Osiayan told the Secretary to State Government (SSG), Festus Ovie Agas, who came to address them on behalf of the governor that they would not leave the venue of the Summit until the governor himself address them.

The SSG while addressing them said they should exercise patience until when the programme was over so that they can converge in his office to address their plight.

Unsatisfied with the position of the SSG, the youths insisted that their names must be submitted to the governor himself to see it first hand and do the needful, without delay to avoid further trouble.

The youths who were visibly peeved by the way and manner the security personnel handled them while protesting said the governor owes an obligation to Delta state citizens to be fully engaged but the fierce looking policemen threatened to open fire on them if they protested further.

The political thugs were however pacified with two bags of Ghana must go filled with packed-food, two packs of bottled water and drinks to cushion the effect of the hunger after chanting “all we are saying give us our appointment letters”.