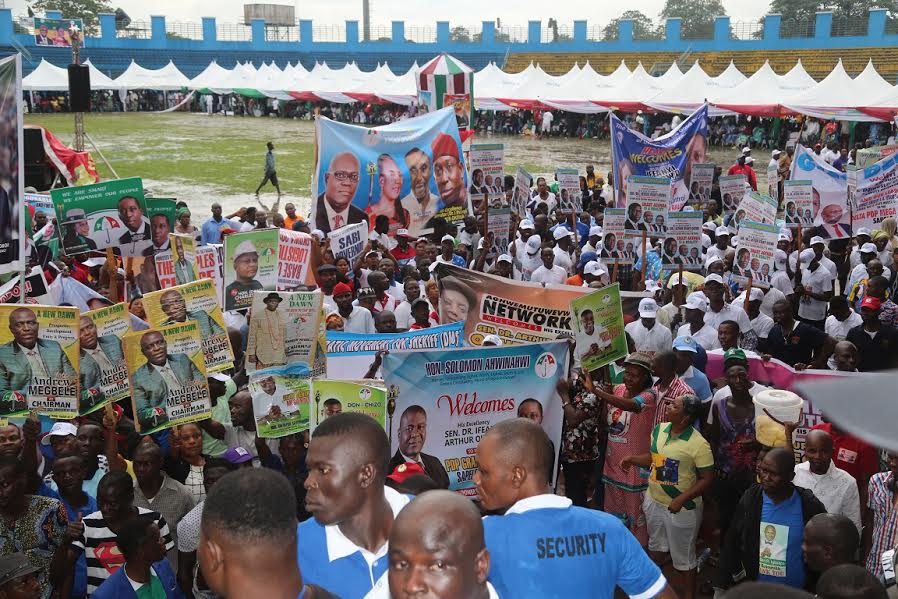 Controversy is trailing the Peoples Democratic Party, PDP Mega Rally held in Sapele on Friday, 23 June 2017, as the state party Chairman, Barr. Kingsley Esiso had been accused of hijacking the idea that was submitted to him.

The accusation is coming from the Chief Press Secretary to the immediate Speaker of Delta State House of Assembly, Mr. Henry Ebireri, who in a social media post claimed to have muted the idea to the chairman, and went further to write a proposal which he submitted to him.

In the statement, Mr. Ebireri, said “Your Party Chairman, Kingsley Esiso thinks he is smart. I released a press statement on behalf of Deltans for continuity announcing a major rally for Okowa”.

Mr. Ebireri further stated that he met with Barr. Esiso and they had discussion on how they intend to mobilise Deltans for the governor as part of the relationship between the Executive and the legislature.

According to him, after their meeting he left the proposal with the state chairman, with assurance that he will get back to him, but he never did.

“A smart boy, he hijacked the programme, constituted committees and sourced for funds without bringing me into the picture. This is our Delta State. He concluded.

It will be recalled that on May 24, 2017, barely two weeks after the ousted of his boss, Rt. Hon. Monday Igbuya, Mr. Henry announced the convergence of a mega rally in Sapele.

About 200,000 people are expected to join leaders of the new political action committee, Deltans for Continuity (DFC) to mobilize millions of Nigerians, particularly Deltans to support Governor Ifeanyi Okowa in 2019.

Convener of Deltans for Continuity, Mr. Henry Ebireri in a press statement issued in Asaba Thursday, said thousands of Nigerians will be at the rally in Sapele.

The group according to Ebireri will use the rally to urge Deltans, home and abroad, to stand up and give Okowa the authority to continue to develop the state.

“Okowa’s passion, energy and effective leadership make him the right person to keep the job going,” the statement said.

“A large array of local, national and international leaders will be present at the rally” the statement added.”

The rally which held as announced, saw the adoption of Governor Ifeanyi Okowa as the sole gubernatorial candidate by PDP members from the Delta Central zone.

Okowa Says PDP Will Be Stronger When United as Delta Central Adopts him as 2019 Gubernatorial Candidate
Back to Barrack: Police to withdraw Mobile Personnel from VIPs