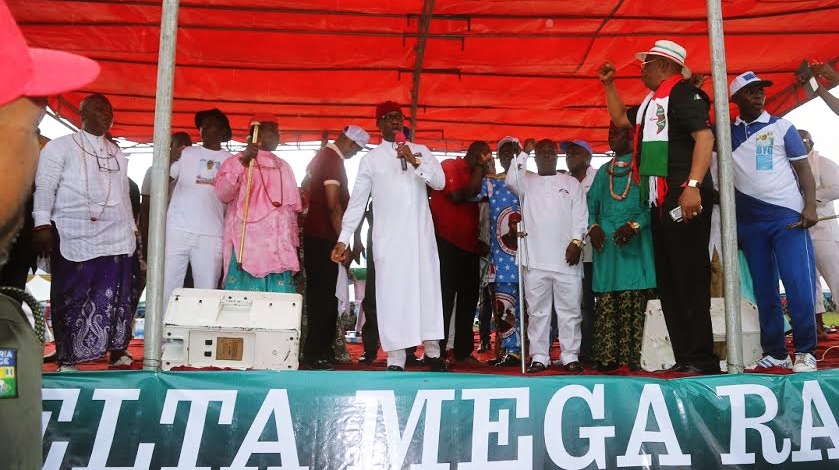 The Peoples Democratic Party (PDP) in Delta Central Senatorial District has endorsed Governor Ifeanyi Okowa as the sole candidate for the 2019 gubernatorial elections.

In a political rally tagged, “Delta Central Mega Rally” held on Friday, June 23, 2017 at the Sapele Township Stadium, prominent politicians in the PDP came out to endorse Governor Okowa, saying his activities within two years in office have qualified him to be the Governor of oil-rich Delta State till 2023.

Those who spoke at the rally where thousands of persons defied the rain to sing the praises of Governor Okowa include a chieftain of the PDP and former Minister for Information, Prof. Sam Oyovbaire who stated, “you  (Governor Okowa) will do full term, here in Delta Central,  decampees have also agreed that Senator Okowa will be Governor till 2023.”

Speaker of the Delta State House of Assembly, Rt. Hon. Sheriff Oborevwori at the rally which also, witnessed harvest of decampees from other political parties asserted at about 2 pm that, “Your Excellency, since 10 am, the people of Delta Central have been dancing, celebrating your two years in office, we are here to show that we love what you are doing and to tell the world that there is no other political party in Delta Central other than the PDP.”

The Minority Leader of the Federal House of Representatives, Hon. Leo Ogor at the rally moved a motion for Governor Okowa to be returned unopposed in 2019 as the sole gubernatorial candidate of the PDP and the Chairman of Sapele local government area, Hon. Ejaife Odebala seconded and a thunderous acceptance was given to the motion.

Chairman of the Peoples Democratic Party (PDP) in South South zone, Brother Emma Ogidi and the Chairman of the party in the state, Barr. Kingsley Esiso received the decampees which included members of the Delta State House of Assembly who won their elections on the platform of other political parties and an All Progressive Congress (APC) chieftain, Chief Paulinus Akpeki back to the PDP.

According to Barr. Esiso, “in 2019, it is Governor Okowa again, the Urhobo nation appreciate you because of what you have done, we are here today to celebrate progress, to celebrate prosperity, members of our party who left for other political parties are back to the family they belong to, the PDP, we are one family.”

Governor Okowa at the occasion, said the Peoples Democratic Party (PDP) will be stronger if they are united and work for common purpose.

“I join the party chairman to receive our people who have come back and for those who have not been with us in the past, who have come to join us today, you have come to test what it is to belong to this family, the PDP family,” Governor Okowa said, stating, “I want to thank all our leaders, we are here as a family, this is the very first rally we have had since I came into office and it is very successful.”

He continued, “the future is better and greater for us as a family, we should remain united as members of the PDP, we will continue to work hard, so that every Deltan will continue to sing the same song, our government will continue to engage our youths for them to be gainfully employed, we have started it and many persons will benefit to become employers of labour.”