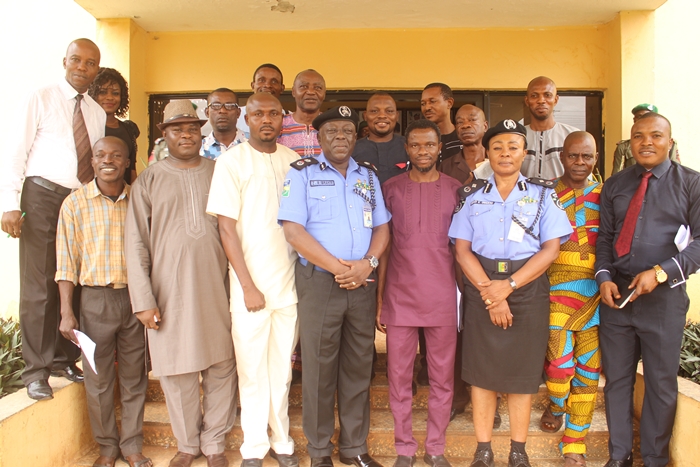 The Commissioner of Police, Delta State Command, CP Zanna Ibrahim has charged journalists in the state to be proactive and objective in their reportage urging them to be Whistle Blowers in order to eradicate the ills currently ravaging the Nigeria Society.

CP Ibrahim who was elated by the forum, tasked members of the press to build and not destroy the society through their various reportage noting that It is only the press that can be able to help the police manage the situation in the country by being very objective for the betterment of the Nigeria Society especially in Delta State.

“We need development in this State, the resources are there but people are scared because of the picture the media paints to the outside world. The press is meant to help us build an environment that is secured so that development will thrive because if the society is not secured, nobody will come and invest. So you have a very important duty to perform.”

While highlighting the importance of Whistle Blowing in the country, the Police Commissioner tasked the Journalists to be proactive in Investigative Journalism and should not conceal wrong practices in the country even if found among Police Officers.

“This is the era of Whistle Blowing, in whatever way you look at it, please be whistle blowers. What ever you see, say it so that this country will move forward. Nigeria has been stagnated for a very long time, countries like Saudi Arabia, UAE and Malaysia that were behind us, are far ahead of us today.It is the press that will change the fortunes of Nigeria, you must expose what is not correct, you must expose people who are not doing the right thing in Nigeria. You are not blackmailing anybody but let the truth be told,” the CP stated.

He added that, Whistle Blowing should equally extend to the activities of the Police Force so that noticeable lapses will be laid off. “When I talk about whistle blowing, it is not just in the society, even in the Police Force. Whenever you see policemen going haywire, get us informed. That is why we have circulated our telephone numbers and through that, we can know our performance.”

The Police Commissioner commended the initiative of the Journalists for reaching out to the Command stating that the Inspector General of Police, IGP Ibrahim Idris, has always stressed on the fact that the Police must embark on a vigorous community partnership.

“The Policing system has had a paradigm shift from a Police Force that have always been seen as a monster to a Policeman that would be seen as friendly. The management has always advocated for community partnership in general terms. Either in relationship with the Press, the Traditional Rulers, or NGOs. It is only when we do that, that members of the public will now have confidence in us and will be friendly to us, then we will get credible information. But if we are seen as monsters, then will not be proffered with credible information. This is the partnership the inspector general of police is advocating and I must commend this initiative.”

Earlier in their various speeches, the Chairmen of the Two Chapels, Paul Osuyi of Sun Newspapers and Bartholomew Ozah of Urhobo Voice, informed the Police Commissioner that they were in his office to chart new ways and rebuild existing partnership for a robust Police/Press relationship in the State.

Some Journalists at the Media Parley with the Delta State Police Commissioner, Zanna Ibrahim

In his address, the chairman of the Indigenous Chapel, Comrade Ozah, gave kudos to Officers and Men of the Command for their efforts in the fight against crimes in the State noting that with the prompt and impressive arrests of suspected criminals, recovery of stolen properties, weapons and ammunition, and rescue of kidnap and trafficked victims, it can be confidently said that Delta State is safe which can be highly attributed to the operational strategies adopted by CP Zanna Ibrahim.

The media parley which had over 50 journalists from both chapels in attendance, was also graced by Comrade Patrick Ochei, Vice Chairman, NUJ Delta State Council.