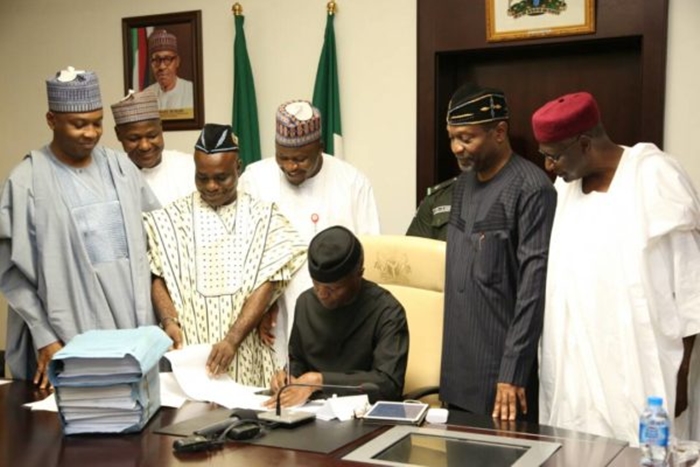 Acting President Yemi Osinbajo on Monday signed the 2017 budget almost four weeks after the National Assembly transmitted the appropriation bill to the presidency.

At the signing ceremony witnessed by principal officers of the National Assembly, led by the Senate President, Bukola Saraki, Osinbajo declared that the N7.44trillion budget will bring back an era of abundance in the Nigerian economy.

The budget passed by the National Assembly since almost a month ago, was dogged by some delay on the executive side as there were some arguments over the alterations of some priority projects by the Assembly and also an expansion of the budget from what President Buhari presented last December.

Osinbajo said the issues had been resolved and that the Assembly had promised to approve funding for the development defining  projects very dear to the executive.

“I must say that the entire leadership of the National Assembly led by the Senate President and the Speaker, adopted a commendably patriotic and statesmanlike approach to our engagements on resolving these critical issues”, Osinbajo said.

“In sum, the engagements yielded acceptable results . The most important being that the leadership of the National Assembly has given us a commitment that the National Assembly will re-instate the budgetary allocations for all the important executive projects, such as the railway standard gauge projects, the Mambilla Power Project, the Second Niger Bridge, the Lagos – Ibadan Expressway etc. which they had reduced to fund some of the new projects they introduced.

“This re-instatement will be by way of an application for virement by the Executive which they have agreed will be expeditiously considered and approved by the National Assembly.

“It is as a result of that understanding and the outcome of our detailed engagements that we feel able to sign the 2017 Appropriations Bill into law today.”

Osinbajo christened the budget  as the  “Budget of Economic Recovery and Growth”.

He said it  reflected the government’s  commitment to ensure strong linkage between the medium-term Economic Recovery and Growth Plan (ERGP) recently launched by President Muhammadu Buhari and the annual budgets.

“It is designed to bring the Nigerian economy out of recession unto a path of sustainable and inclusive growth. The budget has a revenue projection of N5.08 trillion and an aggregate expenditure of N7.44 trillion. The projected fiscal deficit of N2.36 trillion is to be financed largely by borrowing”.

The budget will also splash N2trillion on capital expenditure.

“Let me assure those who have expressed concern about the growing public debt that we are taking several actions to grow government revenues as well as plug revenue leakages. This is because, notwithstanding the fact that our borrowings are still within sustainability limits, we are determined, in the medium term, to reduce our reliance on borrowings to finance our expenditures.

Details of the budget, as approved by the National Assembly, will be made available by the  Minister of Budget and National Planning, Osinbajo said.

Hours before the budget signing, President Buhari in a letter to the Minister of Budget, Senator Udoma Udo Udoma, gave Acting President Osinbajo, the green light to sign the budget on his behalf.

President Buhari wrote the letter to the minister,  according to a statement by Garba Shehu, the senior special assistant to the president on the media and publicity.

Buhari, who is recuperating in London said he had received a full briefing on the Appropriation Bill as passed by the National Assembly.

To buttress the unity at the highest level of government, he said he was yielding his signatory authority to Osinbajo.

The National Assembly, NASS, had passed the budget on 11 May.

Osinbajo was presented a copy by 19 May with the original figure ballooning to N7.441 trillion, from the N7.28 trillion proposed by President Buhari.

President Buhari in his letter said he was “pleased by the joint resolution that the Executive would submit next year’s budget proposals by October 2017 and the National Assembly will conclude the Appropriation process by December 2017, so that the country can return to a normal fiscal period from next year onwards.”