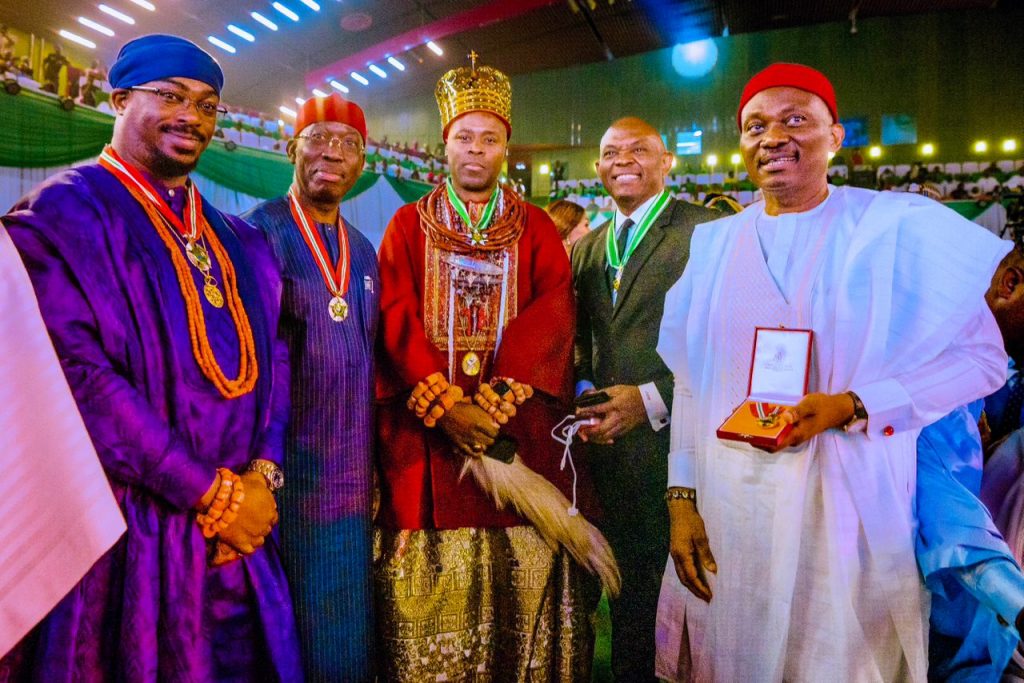 The ceremony which held on Tuesday, October 11, 2022 at the International Conference Centre, Abuja, was presided over by President Muhammadu Buhari, with Vice President Yemi Osinbajo in attendance.

In his remarks shortly after the ceremony, Governor Okowa said that the Award was for Nigerians who had contributed to nation-building and I thanked God that he met the criteria to receive the award.

He expressed gratitude to President Buhari and the National Honours Awards Committee for the investiture and congratulated other Deltans and Nigerians on their well-deserved honours.

Okowa pledged to continue his contribution to nation-building to make Nigeria to realise its full potential.

“I thank President Muhammadu Buhari and the National Honours Awards Committee for my investiture as a Commander of the Order of the Niger (CON), in recognition of my contributions to the development of the nation.

Delta Governor and Vice-Presidential Candidate of PDP, Senator (Dr) Ifeanyi Okowa, receiving his Award of Commander of the Order of the Niger(CON) from President Muhammadu Buhari at the National Honours Awards in Abuja on Tuesday, October 11, 2022 (Pix: Government House, Asaba)

“I congratulate all Nigerians and distinguished Deltans who were also honoured with the various categories of National Awards.

“This award makes me to realise that I have contributed my bit and I hope it will spur me to think more about the growth and development of this country.

“I hope that together in commitment to this nation we will all continue to work with our people across Nigeria to find the growth path that can take us to Nigeria of our dream.

“I must say that I am humbled by this recognition and pledge to continue to play my role to make Nigeria a better nation that lives up to its full potential,” he stated.

Okowa also affirmed that the award would spur him to do more for Delta in the years ahead, adding that the “award is a call to duty for me and I thank God that i have the opportunity of being the Vice-Presidential Candidate of the Peoples Democratic Party.

“We are working very hard and we expect that Nigerians will be in a position to truly realise that the PDP team is the best team at this very critical time in the development of our nation.

“By the grace of God, upon victory in 2023, I will work with the President, Atiku Abubakar and other stakeholders of this nation to find solutions to the current challenges that we have in our nation.

“There is no doubt that the challenges are truly numerous and frightening in terms of disunity, insecurity and economic downturn which is affecting human capital development.

On her part, Director-General of World Trade Organisation Dr Ngozi Okonjo-Iweala, said no award could be more gratifying than the one from one’s country and lauded President Buhari for the honour.

She said the honour was a call to do more in her endeavours and expressed satisfaction with Governor Okowa’s human capital and infrastructural transformation in Delta in the last seven years.

She urged him to do more in the remaining months of his administration.

Responding on behalf of the award recipients, President of the Senate, Dr Ahmed Lawan, pledged their readiness to work with the President in surmounting the nation’s challenges in the remaining period in his tenure.

He described the recipients of the awards as patriotic Nigerians that had impacted positively on the nation in all sectors.

A total of 447 Nigerians were invested with award in various categories by the Federal Government.