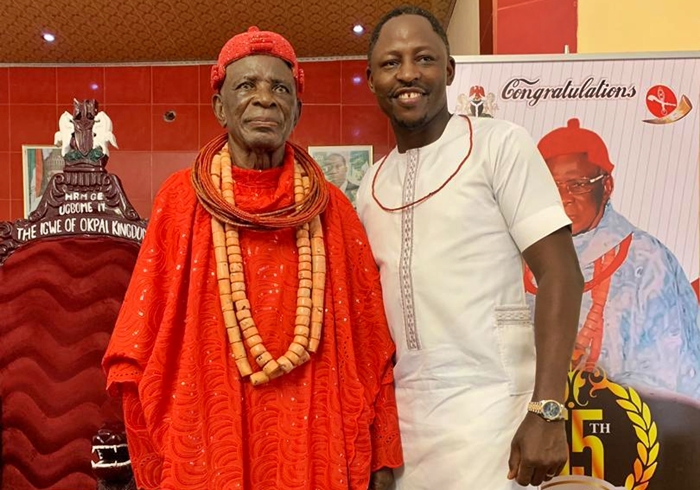 The Deputy Speaker of the Delta State House of Assembly, Rt Hon Friday Ossai Osanebi has been honoured with a chieftaincy title for his kindness and philanthropic life style.

Osanebi at the weekend was decorated as the “Omenosa” of Ndokwa Nation by the traditional institution of Okpai Community led by His Majesty, Igwe Goldring Ugbome, the Igwe of Okpai Kingdom in Ndokwa East local government area of the State.

The Royal Father said his palace recognizes hard work, diligence, selfless service and goodness, stressing that the Deputy Speaker who represents Ndokwa East in the House was imminently qualified for the honour following his outstanding and enviable track records.

He said Osanebi had raised many families out of poverty with his numerous empowerment and human capital development programs and projects, maintaining that the title bestowed on him as “Omenosa” which literally mean “A Generous Person”, was a reward to his generosity.

Igwe Ugbome while decorating Osanebi with the title at a brief ceremony in his palace at Okpai, congratulated the Lawmaker for the honour and prayed God to grant him the wherewithal to sustain the philanthropic life style.

In his remarks, the elated Deputy Speaker expressed gratitude to God for giving him the enabling resources and the heart of giving, saying that many have all it takes to help uplift the live of others but find it difficult to reach out.

Osanebi said “By God’s willing, I will sustain my kindness for others and the philanthropic life style which I have chosen for myself. It is the Lord’s doing. My Bible tells me that a giver never lacks. I will continue to give. I can’t stop because it is now part of me. I can’t move leaving part of me behind”.

“I thank His Majesty for the honour which he said it was in recognition of my investments in human capital development, socio-economic life of others and above all focused in leadership. This honour came as part of activities marking the 55th coronation anniversary of the Igwe. I pray God to grant him good health, long life and wisdom to rule his people.

“I pray God to give me the strength to remain a good ambassador not only to Ndokwa Nation but to our dear Delta State. I will continue to appeal for prayers and support of my people to the administration of Senator (Dr) Ifeanyi Okowa in his determination to take the state to greater heights”, Osanebi stated.