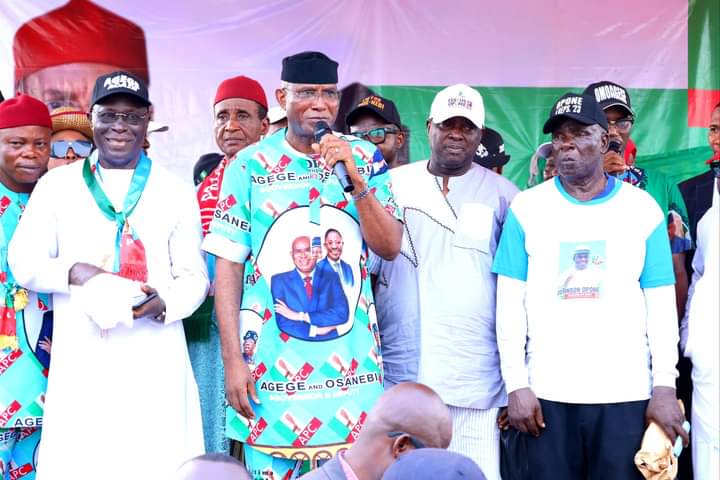 For the second time, the governorship candidate of the All Progressives Congress (APC) in Delta State, Senator Ovie Omo-Agege, has asked the state governor and vice presidential candidate of the Peoples Democratic Party (PDP), Dr. Ifeanyi Okowa, to account for Delta’s share of 13% oil derivation paid by the federal government.

Omo-Agege challenged Governor Okowa to personally give account of how Delta’s share of the money was expended by the PDP-led administration in the state.

The Deputy President of the Nigerian Senate spoke on Monday, December 5, 2022 when the APC ward-to-ward campaign trail visited Abbi, Kwale, Utagba-Uno and other wards in Ndokwa West Local Government Area of the state.

Omo-Agege, who was received by a mammoth crowd of supporters at the various wards visited, stated that there was nothing on ground to justify the huge resources the state had received from the federal government.

Accompanied by his APC deputy governorship candidate, Rt. Hon. Friday Osanebi and other APC leaders, he stated that APC remained the best choice for the 2023 general elections.

The APC governorship candidate noted that the Okowa-led administration marginalised the people of Ndokwa Nation.

He added that his administration will be youth and women-friendly if elected as the next governor of the state.

Omo-Agege explained that it was on that basis he chose Osanebi as his running mate to bridge the gap between his generation and the youth.

Omo-Agege said, “You all know that about seven years ago, Okowa came running for governor under the platform of Anioma Agenda. At a time, he told all Deltans that the people of Delta North have been marginalized and that the only way to address that marginalization was to elect an Anioma son and that when elected he will bring prosperity to the people of Anioma nation and the entire Delta State. But today, as I drive through Ndokwa west local government area, that prosperity that Okowa promised, I have not seen anything like that. For almost 12 years, Charles Emetulu has been in government as commissioner and House of Assembly, but did not attract any development to Ndokwa West local government area within the period.”

“Meanwhile, Emetulu was there when Okowa’s stooge, the Speaker of the Delta State of Assembly held the gavel and Okowa established three universities in Delta State but neither him nor Sheriff, the PDP governorship candidate brought anyone to Ndokwa Nation.

“The Ndokwa Nation contributes too much to the Nigerian economy and Delta State and it is because of Ndokwa people principally that the derivation Funds came to Delta including the one that has been missing which Wike has helped us to trace in Premium Trust Bank. We didn’t know where our N250 billion that was missing was placed but Wike was able to help us and we have been able to trace our derivation money to an account in Premium Trust Bank.”

“We know that we have a law in Delta State that derivation Fund is supposed to be 50% to the oil producing communities and 50% to the government. This 250Bn Okowa hid in that bank we know that 50% belongs to the oil-producing communities in Delta State and before any money is expended it is supposed to be appropriated in the State House of assembly but no, they have not appropriated that money, they should tell us why our derivation Funds are been spent without appropriation. Why we are asking Sheriff, Okowa and Charles Emetulu to give an account of Delta State derivation money, the good news is that God has given us the chance to vote out PDP in the coming election.

He urged Deltans to vote for Tinubu who will help to reopen the economy and make all the ports functional, Export Processing Zone (EPZ) in Ogidigben, “he will also help us so that we can evaluate what happened to our Delta Steel Company, and when all of these are functioning, there will be good jobs for our youths and children; and that is why we must vote for Asiwaju Bola Ahmed Tinubu for President and Senator Peter Nwaboshi and all other APC Candidates.

Earlier, state Chairman of the All Progressives Congress APC, Chief Omeni Sobotie while receiving decampees from PDP to APC at Abbi, noted that “I can assure you that you are not going to regret supporting APC. Over seven years, Delta PDP promised prosperity for all Deltans, but there is no single prosperity. Deltans should go and ask Okowa to bring back our N250billion which president Buhari released to him.”.

The leader of the PDP defectors at Abbi, Tony Ogwu said that the PDP-led Delta Government over the years has not been fair to the Ndokwa nation even with the huge contributions of Ndokwa to the State and National economy and development, hence they have collectively decided to pay PDP back in the 2023 elections by voting the APC.

Ogwu said, “PDP in the past 23 years have relegated the Ndokwa nation in the scheme of things, we are the least to be considered when developmental projects are to be sighted, our people are giving positions that they can’t even use to empower themselves let alone others, today, Ndokwa is at the bottom in the ladder of development index in Delta, no thanks to Okowa and Delta PDP.

“The 2023 elections present an opportunity to pay the PDP back for their years of neglect of Ndokwa Nation by voting them out, and voting for APC, our future as a nation lies with the APC. In 2023, Ndokwa Nation must join the mainstream of our national politics by embracing and voting APC,” he added.

Senator Omo-Agege and his team also visited HRM Oduosa of Utagba-Ogbe Kingdom, Kwale, where he berated the Okowa-led administration.

He assured the monarch that his administration will be fair and address socio-economic and infrastructural development issues facing the people of Ndokwa West LGA.

Thereafter, the monarch, HRM Oduosa of Utagba-Ogbe Kingdom, prayed for Senator Ovie Omo-Agege and his Deputy, Hon. Friday Osanebi to be successful in the quest to lead a new Delta.