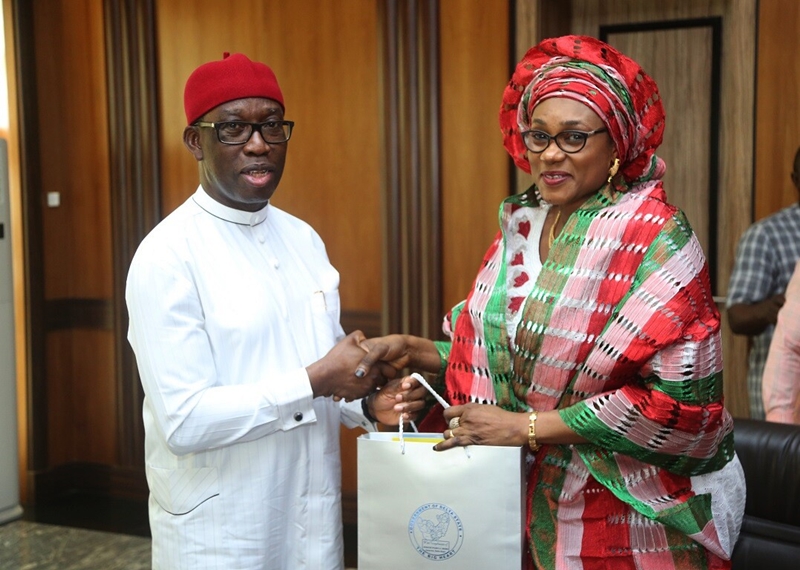 As the 2019 general elections draw near, Delta State Governor, Senator Dr. Ifeanyi Okowa has urged women to be bold in contesting for elective positions in the country.

Governor Okowa made the call on Friday, September 21, 2018 in Asaba when the National Woman Leader of the Peoples Democratic Party (PDP), Hajia Mariya Waziri, led some officials of the party to pay him a courtesy call.

According to Governor Okowa, “as we work hard to support women to elective positions, I believe that they also need to stand up and work hard for themselves.”

“It is very important that the women work for themselves too because, when it comes to elective positions, it is not easy to decree that women should emerge, especially when we want a free and fair elections which has always been my belief,” he said.

He continued, “I believe that the women are strong enough to support themselves as long as they are able to take up the challenges in the electioneering period.”

Governor Okowa thanked the Woman Leader for recognizing the roles his administration was playing to ensure 35 per cent affirmative action for women, especially in appointive positions, assuring that the women deserve to contest for positions like their male counterparts rather than wait to receive only positions zoned to them.

Earlier, Hajia Waziri had told the governor that they were on sensitization visit for women to be granted more opportunities in elective positions in the 2019 general elections.

She commended Governor Okowa’s administration for its commitment to the empowerment of women, noting that while a lot of women were appointed into positions, most of them won during the local government elections and some are also, serving different constituencies in the Delta State House of Assembly and the National Assembly.