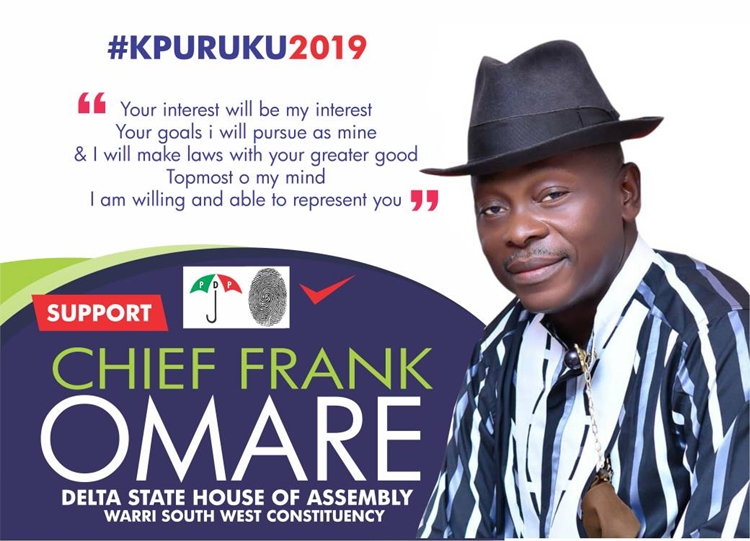 …Describes It As A Failed Project By The Sponsors.

A former Commissioner for Environment in Delta State and a leading aspirant to the Delta State House of Assembly, Warri South West Constituency, Chief Frank Omare has condemned in strong term the online publication that he has stepped down from the race.

Chief Omare in a statement said he never contemplated and will not step down from the contest as he remained the most popular, experienced and qualified among all other aspirants in the race.

Describing the publication as wicked and a failed project by the sponsors, Chief Omare stated “My attention has been drawn to constant attack and blackmail by Secret Reporters online medium which is being sponsored by some persons. I considered the exercise as a failed project. I have been a member of the People’s Democratic Party, PDP since 1998. I am in the race for Delta State House of Assembly, Warri South West Constituency and I have not withdrawn from it”.

He said further “looking at those contesting with me, I believe I am the most capable and experienced hand in the contest. I am not a political Dodo. I am assuring my supporters especially in Warri South West, with all the efficient and credible delegates and party leaders that I can never step down from the contest. The election is not just about me but the future of the good people of Warri South West Constituency. I know that the blackmails is to dissuade the delegates not to do the needful owing to my popularity”.

Chief Omare who is the immediate past Director-General, Special Programs to Governor Ifeanyi Okowa, charged the delegates to get prepared to vote for him during the party’s primaries on 2nd of October so as to emerge victorious and then face the greater task ahead which is the general elections.

“We are already in the middle of Escravos River. It is the point of no return. We have enough fuel, strength and capacity to cross to the next community “. Omare stated.