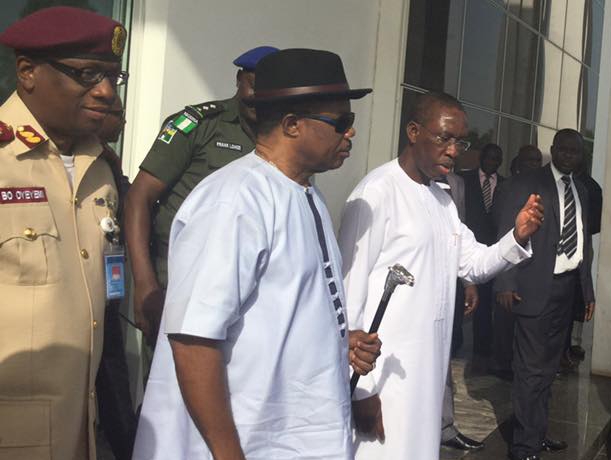 The annual nightmare experienced on the Niger Bridge by commuters to the South-East during yuletide season will be a thing of the past this year as the Governor of Delta State, Senator Dr Ifeanyi Okowa, his Anambra State counterpart, Dr Willie Obiano and the Corps Marshal of the Federal Road Safety Corps, Dr. Boboye Oyeyemi have assured road users of hitch-free flow of traffic.

Briefing the press after a closed door meeting which lasted about 40 minutes, the trio said they were concerned that commuters spend a lot of man-hour on the road during the yuletide because of traffic grid-lock.

Enthused Governor Okowa said, “it was a very successful meeting; we discussed a lot of issues concerning security and free flow of movement for people travelling to the South East.”

“You know that it was important for effective collaboration between Delta State and neighbouring states in different areas and we agreed on so many areas, especially on security and how to ensure that there will be free movement during the yuletide,” Governor Okowa said, adding, “we cannot disclose security measures that we have put in place, but, I can assure you that as it concerns movement to the South-East during the yuletide, we have agreed on measures to tackle the challenges of free flow of movement and with the collaboration between the two state governments and Road Safety, travellers will be happy travelling for Christmas.”

Governor Obiano in his contribution said, “our concern is about ‘Ndi Anambra’, we discussed about the decongestion of the Niger Bridge during the Christmas season and also discussed what will benefit us economically because, you can not wish away the fact that there are a lot of Ndi Anambra residing in Delta State and Deltans are also, doing business in Anambra State.”

“There will be free flow of movement on the Niger Bridge,” Governor Obiano said while the FRSC Boss, stated, “we agreed on a number of issues, and I can assure you that broken down vehicles would be removed from the highways while other security measures have also been agreed on.”.