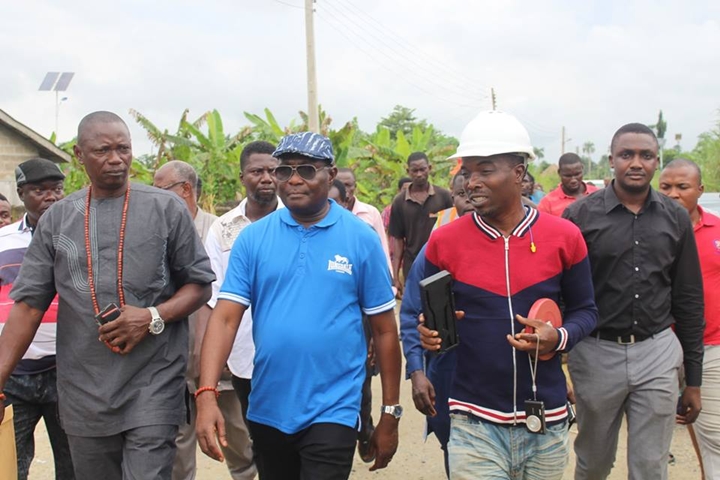 Concerned indigenes of the Ikpide-Irri community and a Pan Isoko group, Isoko Monitoring Group, (IMG), had petitioned governor Okowa over the usage of substandard materials in the execution of the project by the contractor.

Inspecting the substandard project Thursday, the state Commissioner for Works, Mr. James Augoye, summoned the contractor to report to his office in Asaba next week even as he expressed dissatisfaction, warning contractors that the governor Ifeanyi Okowa led government will not condoned any act of execution of substandard jobs in the state, saying that his visit to the community was as a result of the series of protests by concerned indigenes of the community and the Isoko Monitoring Group, (IMG).

According to the visibly angry Commissioner, the contractor have compromised the quality of the rigid concrete pavement road project, adding that the actions of the community to call the attention of the government to the project shows that the community have a sense of ownership and belonging to get the best on projects being constructed in their domain.

“Well, I have gone round the project to see things for myself, and all the issues raised by the Isoko Monitoring Group and other individuals regarding the failures of the culverts as well as the contractor not working according to specifications. I must thank those who have petitioned because they have drawn our attentions to certain things that are happening. Which of course, is an eye opener in the inspection of other projects in different areas of the state.

“Those that have petitioned, it is not as if they do not want the contract to be done, this is what we want. Community should take ownership of contracts of jobs that are being executed by government in their communities. It is not confrontational, it is for the good of the community. Let me use this medium to appeal to communities where road projects are ongoing to notify government of any substandard jobs being done by the contractors.

“I want to appeal strongly to the community that they should be patient with, the failed culverts will be removed immediately and the other ones that appears to us to be solid have to be subjected to test, if you look at it you will think it is good until it goes through test you may not know. We are going to subject them to test, to test quality if of course it will stand the test of time but if not the entire culverts would have to be demolished.”

While assuring the community of government prompt action in making sure that all the defects noticed in the job are done to standard by the contractor, the commissioner, made it clear to all contractors to engage youths in the areas of operations, saying the measures would provide work for the youths and reduce youth restiveness on site even as he enjoined the Ikpide-Irri people to remain law abiding.

Earlier, the IMG delegation, who accompanied the commissioner in the inspection and led by Engr. Darlington Otete, a Lead Consultant in Quality Management System and Project Assessment Processes, took time to lecture senior directors and engineers of the Works ministry on standards in road construction and to jettison compromise.