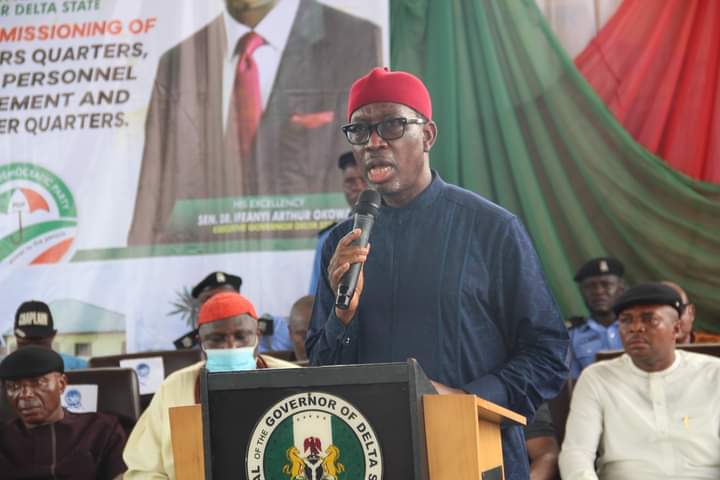 Delta Governor, Senator (Dr) Ifeanyi Okowa, has cautioned against continual face-off between oil companies and host communities, saying it could lead to further divestment in the oil sector.

The governor gave the advice while inaugurating the 2.1-kilometre Obitobon-Elolo-AjaokurreOgbo-Orubu roads in Ogidigben and 2.3-kilometre roads in Benikrukru, both in Warri South-West Local Government Area of the state on Thursday.

He stated that Nigeria was producing only 60 per cent of its oil production quota because of the recent divestments from the nation’s oil and gas sector.

He said that communities were at liberty to protest but warned against causing breach of activities at oil companies, and urged them to channel their complaints to the State Ministry of Oil and Gas for further action.

He appealed to the communities to always channel their requests to the state government, saying “when you make a request and your request is not met, please channel it to the Ministry of Oil and Gas and we can always find a means to intervene on your behalf.

“We need to handle everything with care to prevent the international oil companies from further divesting from the nation’s oil and gas sector.

“At the moment, we are operating at 60 per cent of our production quantum because many of the oil companies are beginning to withdraw their investments from the country.

“But that does not mean that the oil companies would take advantage of that situation not to fulfil their obligations as stated in their memorandum of understanding with host communities.” Okowa said.

Okowa who was in company with his Deputy, Mr Kingsley Otuaro, Senator James Manager and member representing Warri South-West in the state Assembly, Mr Emomotimi Guwor, commended youths of the communities for supporting the completion of the projects without hindrance.

The Governor charged those who have the privilege of being close to Government to put their community first before self as a way of attracting development to their communities.

He especially appreciated Engr. Matthew Tonlagha for the effort he made to attract the project to the community, saying it’s important for those who have the privilege to associate with government to remember their community.

On the dilapidated state of the General Hospital at Ogidigben, Okowa apologised for the decay, adding that after undertaking an inspection of the hospital, he has directed the State Ministry of Housing to carry out a total rehabilitation of the hospital.

“Am excited to be here today in Ogidigben and am glad that the State Ministry of Works (Rural and riverine) and the contractor were able to deliver on this project.

“I have inspected the general hospital Ogidigben and I must publicly apologise to the community for the poor state of the hospital.

“I am not aware that the hospital is in such state of dilapidation, but I want to reassure you that action has already been started and I have directed Ministry of Housing to undertake a total rehabilitation of the hospital.

“I can assure you that we will act very fast and in the next few months you will get a totally different and transformed hospital,”he said.

On the abandoned projects by DESOPADEC, he assured that he would discuss with the management to intervene in ensuring completion of the projects.

Commissioner for Works (Rural and Riverine Roads), Mr Solomon Golley said the contract which involved rigid concrete paved Road and side drains was awarded in 2017 as part of the state government’s commitment towards improving road networks and transformation of communities in the state.

Welcoming guests earlier, Chairman of Warri South-West Local Government Council, Hon. Taiye Tuoyo, said the people were excited to witness the inauguration of the critical project in Ogidigben community and appealed for the extension of same gesture to other communities in the local government area.

Austine Ajuremi who spoke for Ogidigben community said Okowa was the first governor to construct a road project in the community, adding that economic activities had greatly improved since the road was completed.

The community appealed for the construction of phase two of the project to link the remaining communities.