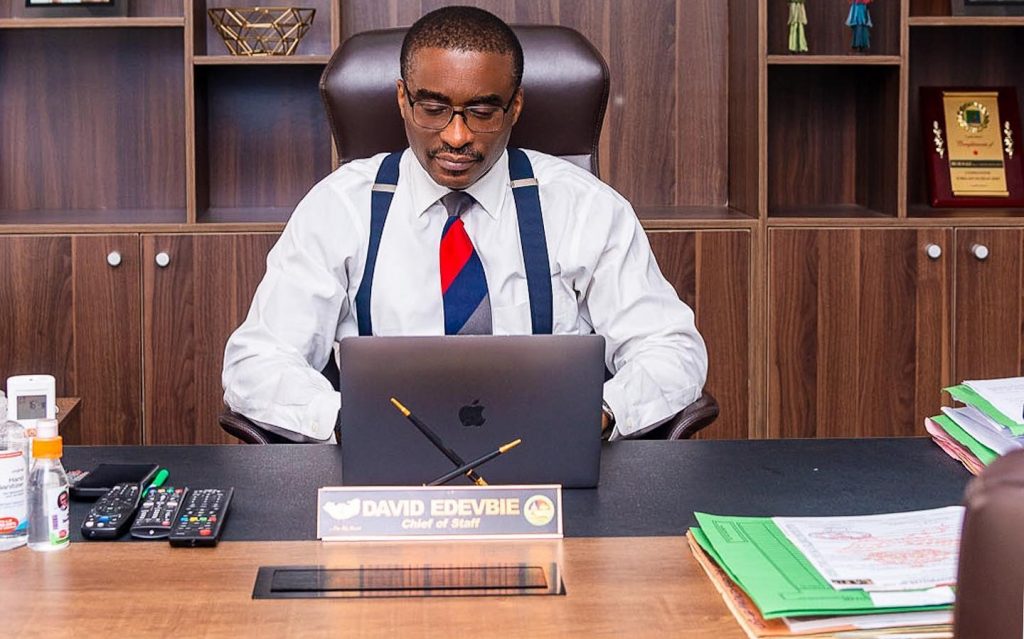 In the Vanguard Newspaper Viewpoint features published on December 7, 2020, Governor Ifeanyi Okowa’s Special Assistant on Media, Nobert Chiazor, by the approval of Governor Okowa himself, revealed the following about David Edevbie:

“Ever courteous and self-respecting, he is not given to vulgarity or imprudent crudity that are common mannerisms of most political office holders in Nigeria. Far from a stormy petrel, Edevbie is neither a die-hard troublesome politician nor a bullish power monger. He acts more like a genial player, a gentleman in government.

“An affable image refined by disciplined parental  nurture and cultured British peculiarity, Edevbie made a dramatic entry into Nigeria’s political space in 1999 when he flew home to assume office as Commissioner for Finance and Economic Planning, (and) by the time his tour of duty ended in 2003, he had transformed a lethargic civil service from a slow outmoded bureaucracy weighed down by dusty files into a vibrant technological- savvy, computerized institution, leveraged by speedy and efficient operations in fiscal management.

“His pedigree propelled him to national reckoning when he received an invitation to be the Director of Finance and Strategy in the campaign of the then PDP presidential candidate, Umaru Musa Yar’Adua now late. He was later appointed Principal Secretary when Yar’Adua was elected president in 2007, serving until April 2010 after the death of the head of state, to establish his consulting firm, Avantgarde, reputed with tested portfolio in Power, Oil & Gas, Mining, Health, Telecommunication, Financial Markets and Hotels.

“He returned to mainstream politics in 2014 and became a principal actor in Delta PDP gubernatorial race, conceding to Okowa who emerged flag bearer on December 8 primary and ultimately, governor on May 29, 2015.

“Political tolerance and love of Delta would bring both men together in power as Edevbie became Commissioner of Finance again after his 1999 debut and got appointed Chief of Staff to Okowa in his second tenure as Governor.

“Okowa’s accommodating nature and gentle spirit had coalesced with Edevbie’s civilized nurture and competence to helm in the stronger hold, a new Delta, driven by a policy thrust named SMART Agenda.

“Edevbie as Chief of Staff has so far done his bit coordinating key policies and activities of government appointees with matchless focus and fastidious diligence, befitting of his standard management orientation.

“Together, the Chief of Staff and the Governor are working in the seamless mix to address the challenges of an enchanting but complex state, under a precarious economy influenced by the global meltdown of recession and the phenomenon of a novel pandemic.

“The Edevbie model – power with purpose and responsibility represents the indomitable spirit of youth and the enduring value of the dignity of man.”

These words issued from the Government House, Asaba, by the approval of Governor Okowa himself, truly depicts Edevbie’s essence.

Today, Edevbie is gunning for the Governorship of the same Delta State in which he had supported various administrations to succeed.

The powers that be have severally acknowledged that he is the best.

Delegates of the PDP across the length and breath of the state also acknowledge that Edevbie is the best and they all feel it only makes sense to let the best do the job.

It will therefore be a humongous disservice to Deltans, in fact, a mortgage of the state to nothingness, for our affable Governor Okowa and the respected leaders and elders of the PDP to, for whatever sentiments, grievances or guise, settle for less and deny the people of the opportunity of having their best as the next Governor.

Let good reason, good conscience, love for the state and commitment to a better future for Deltans be the single guide in this matter.

We believe, deep in his heart, Governor Okowa knows this is the best path to follow and would be kind to Deltans to give them the best. We believe he would reject all such suggestions of grievance and malice being falsely attributed to him by those who insist on propagating disaffection, disharmony and disunity within the PDP and among ethnic groups for their selfish interest.

We believe that, with his well known wisdom and love for his state, Governor Okowa will settle for only the best, and the best, he knows, is David Edevbie.