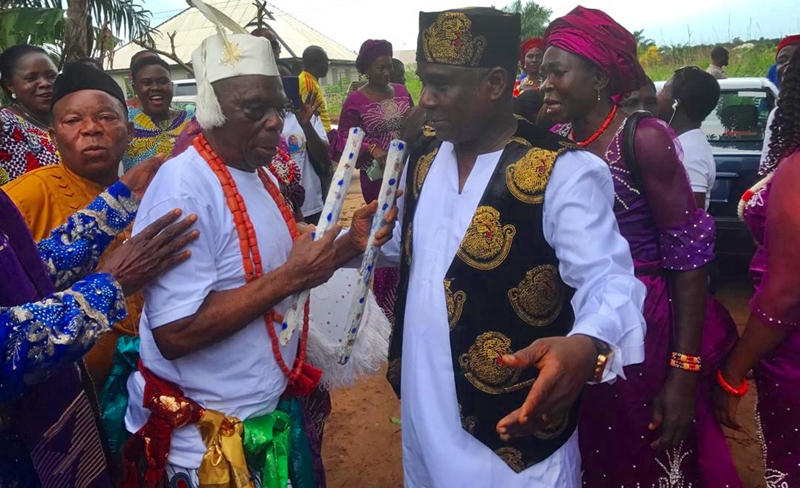 A new Onotu-Uku (Traditional Prime Minister) has been installed in Umutu community, Ukwuani Local Government Area of Delta State in line with the age long tradition of the People.

With the installation, the responsibility of coordinating other chiefs in the kingdom in administrating affairs in the community now rests on Chief Obianukor, in consonance with the Okpalla Uku, the traditional ruler of the kingdom.

The installation ceremony was witnessed by the cream de-la-cream in the society, including political office holders, top government functionaries, captains of industries, community and opinion leaders and various youth and women groups.

The staff of office was handed over to the new Onotu Uku by the immediate past holder of the exalted traditional position in the community who has been admitted into the council of Okpalla Uku.

It was gathered that age, fitness, influence, service, exposure, integrity and respect were major factors that are considered in the choice of the Onotu Uku of Umutu community.

These qualities, according to the people were inherent in Chief Ojo Obianukor as he has been a great asset to the kingdom having served as the treasurer of the community for over thirty years.

The handing over of the staff of office triggered wild jubilation with gun salute, cultural displays and dance parade around some major streets in Umutu.

The staff of office was handed over to the new Onotu Uku by the immediate past holder of the exalted traditional position in the community Chief Okwa Joseph Eleh who has been admitted into the council of Okpalla Uku.

Speaking with newsmen at his chambers, the new traditional Prime Minister, Chief Ojo Obianukor said service to his people was a passion he has sworn to uphold till his last day on earth, stressing  that his installation as Onotu Uku of Umutu Kingdom came with enormous responsibilities.

The nonagenarian promised to build upon the legacies of his predecessors and called for the support and cooperation of his people.

The Ozodinogwe of Umutu, Chief Peter Enwuniku, retired Rear Admirer Mike Onah and Hon (Dr) Alphonsus Ojo in their remarks extolled the leadership qualities of the new Onotu Uku, describing him as a champion of peace, unity, progress and development in Umutu community.

Hon Alphonsus Ojo at the Installation of father, Chief Ojo Obianukor as the Onotu-Uku of Umutu

They commended the kingdom for recognizing the immense values of the new traditional Prime Minister and stressed the need for the people to remain focused in the affairs of the Umutu kingdom.

Some members of the Delta State House of Assembly, including Rt Hon Peter Onwusanya, Honorables Johnson Erijo, Dennis Omovie and Efe Ofobruku, congratulated the children of Chief Ojo Obianukor on the emergence of their father as the traditional Prime Minister of the kingdom.

Some members of the Delta State house of Assembly at the event.

While commending the Umutu community for the honor done Chief Obianukor, the lawmakers prayed God to grant him the wherewithal to succeed as the Onotu Uku of Umutu.

Others who spoke also congratulated Hon Alphonsus Ojo and his siblings for the successful installation of their father as the Onotu Uku of Umutu and called for sustained peace in the kingdom.