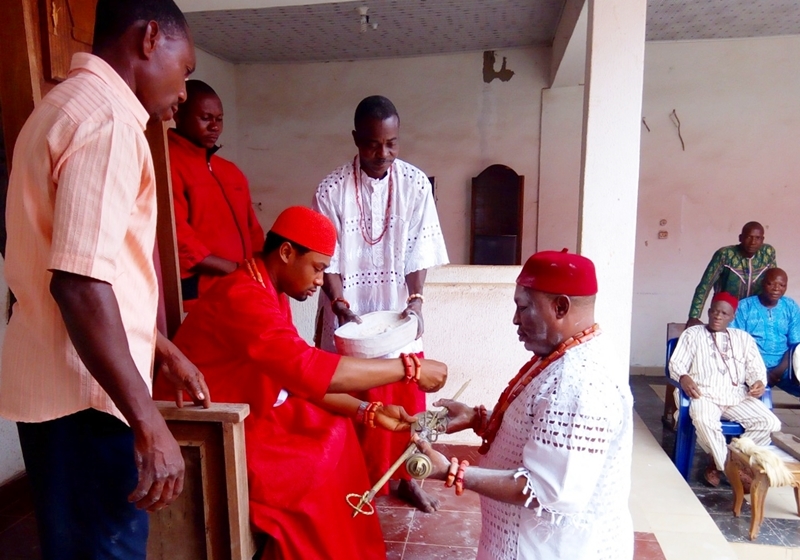 …Says Unity Of Community Paramount To Him.

The highly revered monarch of Issele-Uku Kingdom, HRM Agbogidi Obi Nduka (MNSE) has in a well attended Izuani, withdrawn the chieftaincy title of Isagba earlier bestowed on Fidelis Jigide, adding that the decision was predicated on his belief for peace and unity of the Kingdom.

Agbogidi Nduka, who after de-robing the former Isagba, retreated inside his inner chambers for a while.

Emerging again from the inner chambers, the wisdom endowed traditional ruler pronounced same Fidelis Jigide as the Esogba of Issele-Uku Kingdom, charging him to take responsibility for resolving all traditional and politically related cases in the town on his behalf.

The Royal Father adorned now Chief Jigide with the title of Esogba Wadieso Eze Agbabu, insisting that nobody fights with the King, not even when appointment of chiefs and their installations is his prerogative.

According to Obi Nduka, “The withdrawal of the Isagba title from Fidelis Jigide has put to an end the tussle surrounding the rightful ownership of the title.

“My leadership is to ensure the reign of peace and unity in the Kingdom which was handed over to me by my forebears. It became necessary for me to withdraw the title in the interest of peace in my domain.

“However, the people of Issele-Uku must mark this day for remembrance and reference, in the sense that our tradition is in our hands to nurture and to keep. Outsiders cannot teach us our tradition; because our tradition has always provided a way of solving any issues arising from traditional processes as bequeathed to us by our forefathers.

“I want to advise that we must always have faith in our traditional processes by resolving our differences using internal traditional mechanisms for settlement. We must not resort to using outsiders or other means to resolve our issues.

“On this note my people, having found Fidelis Jigide as a worthy son of Issele-Uku, a peacemaker and a man of tradition in whom I am well pleased, I hereby pronounce him the Esogba of Oligbo Kingdom. His function is to seek peace all the time in the Kingdom.

“He must ensure trouble does not brew in Issele-Uku; where there is trouble in the land, he must be the first pot of call for peace and unity.

“Let this represent a new orientation in us that henceforth nobody wrestles with the Obi or Issele-Uku against anything. This title of Esogba (Wadieso Eze Agbabu) will continue to consciously remind us that our tradition is sacrosanct and we must have faith in it”, Obi concluded.

Meanwhile, the new Esogba of Issele-Uku Kingdom, Chief Fidelis Jigide instantly received traditional chalking (ima nzu) and subsequently was installed by being dressed with hand and neck beads and presented with staff of office.

Moreover, prominent traditionalists in Issele-Uku have hailed the decision of the Obi, maintaining that that was the best way to go to restore peace in the town and give regard to our tradition.

Speaking to our correspondent was the Ogbelani of Issele-Uku, Diokpa Isimchei Okonkwo who thumbed up for Obi Nduka, addressing him as Obi Udo (King of Peace). He affirmed that the Obi had made the right decision with utmost regard to our tradition and restoration of peace.

The Chi-Obi of Issele-Uku, Prince Egbo Adigwe posited that nobody can challenge the Obi on matters of chieftaincy appointments and installations, insisting that as a man of peace the Majesty had adequately resolved every issue relating to Isagba Title.

On his part, the Agujiegbe of Issele-Uku, Chief Gabriel Ebite said he was the happiest to witness the event. He described Obi Nduka as a phenomenal traditional ruler, stressing that God had indeed used him as an instrument of peace and unity.

Prince Austin Maha thanked God for the wisdom he had given to Obi Nduka, praying that the Kingdom as handed down to him by our forefathers would last forever.

However, sounding emotional, the Esogba of Issele-Uku, Chief Fidelis Jigide appreciated Agbogidi Nduka for the favour and honour done him.

He said he was short of words for what had transpired today, promising not to disappoint Obi Nduka and Issele-Uku people for the new responsibility that had been assigned to him by this chieftaincy installation.

Oligbo Royal Palace was a carnival of sort as the new Esogba, his family and friends, including elders and leaders of the community, all dancing in jubilation for the new chieftaincy title, bestowed on a worthy son – Chief Fidelis Jigide.

It could be recalled that the chieftaincy title of Isagba was contested for by Fidelis Jigide and an American based Ngozi Azuh. When Fidelis Jigide was presented by Umueze Isei to Obi Nduka for recognition and installation as Isagba, Obi asked if he was the rightful person three times but without any counter. Believing that the family, quarter and larger Umueze Isei had followed all the procedures, Fidelis Jigide was chalked and after some weeks he was subsequently conferred with the title of Isagba.

But believing that he had been cheated as the next in line for the Isagba Title, Ngozi Azuh went to court to challenge the validity of Chief Jigide for the title, against following the internal traditional processes of resolving such a matter.

Subsequently, Obi Nduka conferred a personal chieftaincy title of Esogba of Issele-Uku on Chief Fidelis Jigide, to carry on with the good work he had started as a patriotic son of Oligbo Kingdom.