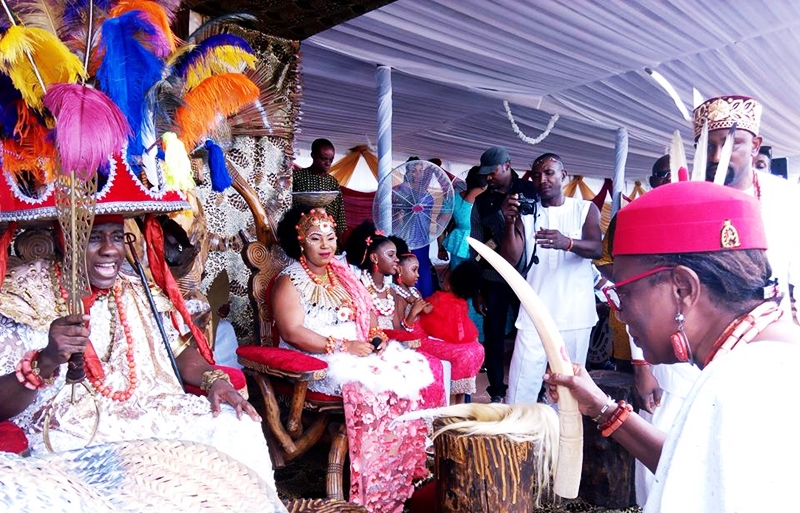 It was indeed a rousing welcome as Ndi Obosi of Ukwala Kingdom in Anambra State, gave a standing ovation to Her Royal Majesty, Obi Martha Dunkwu, Omu Anioma, on her arrival at the celebration of Obiora Iwaji Festival by Igwe Chidubem Iweka III, on Saturday 6th October, 2018, at the Obosi mini stadium.

Also in his address of welcome, HRM Igwe Iweka acknowledged the presence of Omu Anioma and her entourage and specially welcomed her.

The well built and articulately fluent Traditional Ruler said that the Obiora is a period of peace.

According to him, “Obiora is the celebration of the harvest of new yam and eating of it (Iwaji), which comes with Thanksgiving to God Almighty for the bounty of harvests. However, more importantly, we are thanking God for peace which is what Obiora symbolizes. Peace is more honourable than fight”, Igwe Iweka explained.

He further described the 2018 7th Obiora Iwaji Festival of Obosi, Ukwala Kingdom as a year of reconciliation and reconstruction and more importantly of purging and rejuvenation.

“I thank God for the human progress made by our illustrious people in the year under review. From inception Obiora Festival has been a mandate of peace and tranquility”, Igwe Iweka affirmed.

Going forward, the highly revered monarch recognised the new DPO of Obosi Divisional Police Headquarters, SP Usman Ibrahim and the Chairman of the Obosi Vigilance Group, Mr. Uche Okoye Atu for their excellent and proactive security intelligence that has reduced crime and criminality to the barest minimum in the area.

More importantly, the relationship loving monarch recognised the Omu Anioma for her articulateness in leadership delivery and promotion of the culture of Anioma people. He therefore recognized her to speak to the Obosi Festival audience for 10 minutes.

Addressing the audience, HRM Obi Martha Dunkwu, Omu Anioma attributed the calibre of guests that graced the festival as an exhibition of the leadership prowess of His Royal Majesty Igwe Chidubem Iweka III, Eze Obosi Kingdom.

According to the Omu, “Leadership is not taught in a three weeks lecture class. You have shown leadership by the way and manner you have conducted the affairs of your people, particularly your drive to preserve the culture of your forebears.

All over the world people cherish their culture and preserve their tradition. I must commend you for preserving the values that your people of Obosi cherish.

I must say I am thrilled by the love and peace that exist here in your kingdom, of course speaking loud of your choice of Obiora as the symbol of your Iwaji Festival.

If you had organized this festival and your people did not attend, then you are not recognised as the Igwe. But you are here, and look at the mammoth crowd, it shows how much you are loved by your people. I must encourage you to continue to carry your subjects along in every of your decision.

From a sincere heart, I want to also advise the Obosi people to continue to accord reverence to their king. He is the symbol of your existence and the reason for your hope.

Support the Igwe and give him all the necessary assistance, by so doing you will discover their is unspeakable peace and love existing communally among you; and with that you witness consistency of progress and development”, Omu posited.

However, the Anioma Culture Ambassador did not end her speech without telling Ndi Obosi how beautifully cherished Anioma culture is to her people and outsiders.

She told them about the aesthetic Akwa Ocha fabric and why Anioma breeds ever remain unique and culturally striking wherever they are found.

The Obiora Iwaji Festival of Obosi, witnessed different but classic performances from the chiefs, the titled elders, women and children.

The Obosi Development Union in their presentation, called on well meaning Obosi citizens to see the 2018 edition of Obiora Iwaji Festival to be a total reflection of peace, adding that they should join hands to truly affirm the economic position of Obosi in Anambra State as the most populated zone and revenue earner.

Also, the Ote Nkwu brought in palm wine for Igwe’s tasting and blessing, while Di-Nta brought a short grasscutter for the Igwe.

While royal homages were being paid to the Igwe, Ndi Ichie performed to the Egwu Ekwe in solidarity with the king.

As customary with the Obosi people, the women presented the kolanuts for breaking, while the royal maidens brought the water with which the king washed his hand before breaking the kolanuts.

The highpoint of the Obiora Festival was the cutting of the yam (Iwaji), which was given first to the children to eat. It was a sight to behold as the children filed out in their numbers to receive the roasted pieces of yam with oil for eating.

The Omu Anioma was accompanied on this special invitation by the Omus of Obior and Ogwashi-Uku, HRH Omu Onyebuchibe Okonkwo and Omu Edith Rafua respectively; with Mr. Osita Onochie, Comrade Patrick Ochei and others representing in the entourage.