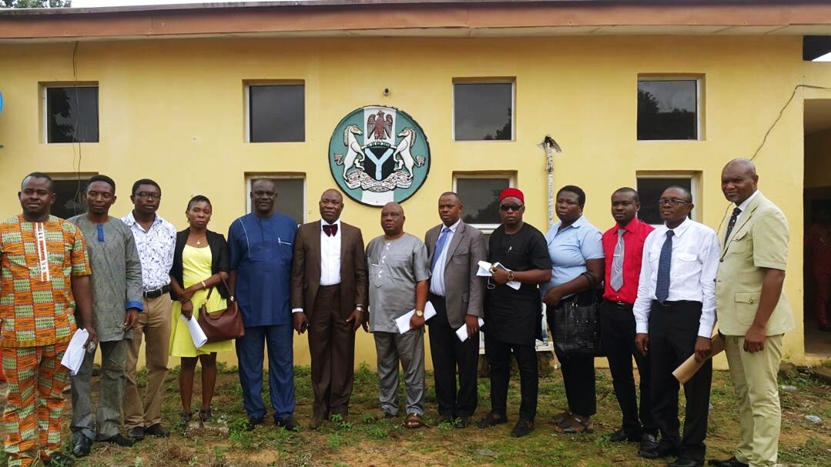 The Chairman of Oshimili South Local Government Area, Pst. (Barr) Chuks Obusom has charged engineers to base their work on expertise rather than on monetary reasons appealing that they should see the difference between professionalism and pecuniary interest when executing any project.

The local government council chairman stated this when the executive members of the Nigeria Society of Engineers (NSE) Asaba Branch, paid him a courtesy visit in his office at the LGA secretariat.

Barr. Obusom appealed to the engineers to as much as possible, maintain standards in project executions. “Sometimes, engineers put pecuniary interest over and above professional standards and it is not helping matters. Buildings are collapsing because the engineers failed to do what they are supposed to do. So I want to appeal to you people to talk to your colleagues to do the right thing.”

He noted that when he was chairman project monitoring of Oshimili South in 2006/2007, he ensured that he never yielded to the several temptations which crossed his line in course of his assignment stating that he maintained the enforcement of professionalism in the part of the contractors and engineers saddled with execution of projects in the council.

The chairman also appreciated the body for their visit to the governor over the flood crisis in the state capital noting that it was a right step and a positive contribution to the development of the state. “We cannot have engineers in the state, qualified engineers by their own right and things are not going right. I want to appreciate you people for that blueprint you presented to the governor.”

Earlier, the Chairman, Nigerian Society of Engineers, Asaba Branch, Engr. Bemigho Ofoeyeno stated that the Engineers were at LGA’s Chairman’s office not to only make the engineering body better known to his government but to amplify the engineers as a professional body with respect to infrastructural development in the state and to commend him for his determination, competence and commitment to the development and maintenance of peace across the local Government Area.

“Your administration of the local government area has witnessed a number of engineering projects being executed and commissioned such as the rehabilitation of the collapsed fence in the council premises, the repair of the council grader and other heavy duty machines, the renovation of Oko Anala health centre, the grading of Oko road, the Revenue court, the construction of a poultry farm in the council premises, the periodic evacuation of refuse in the Local government Area and many others,” Engr. Ofoeyeno stated.

The NSE Chairman further informed and solicited the support of the LGA boss towards the Branch’s Annual General Meeting (AGM) which will take place from on the 28th – 30th September, 2017 at Swiss Spirit, Asaba and the Society’s National Engineering Conference/AGM coming up on 20th – 30th November, 2017 in Abuja.

In a closing remark by Engr. A.I Onichabor, the Head of Department, Works, Oshimili South Local Government who also doubles as Chairman of the Nigerian Institution of Civil Engineers (NICE) Asaba branch, he commended Barr. Obusom for being above other local government chairmen in the state noting that He has a legacy to show for his years in office.