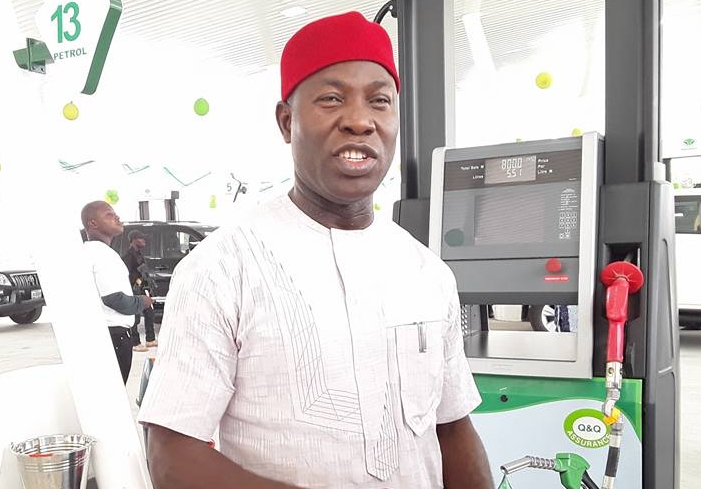 The Executive Chairman of Oshimili South Local Government Area, Barr. Chuks Obusom has declared as untrue, the news of the purchase of brand new Toyota Camry cars for Council Chairmen in Delta state by Governor Ifeanyi Okowa disclosing that the cars were purchased solely by the Chairmen without state government assistance.

The council chairman who is also the secretary of the Association of Local Government of Nigeria (ALGON) in the state and as well as a clergy man, made this clarification at a media chat with journalists of the Indigenous Correspondents Chapel (ICC) of the Nigerian Union of Journalists (NUJ) Delta State Council.

Barr. Obusom further gave insight as to how the Council Chairmen in the state acquired the exquisite cars. “It is not true that the State government purchased cars for us. As council chairmen, we are entitled to official cars and our official cars as approved is Toyota Camry. On assumption of office, we didn’t have that kind of money and we didn’t meet any official car. I have been running the council with my personal cars for more than two and half years. I assumed office as Chairman with my 3 cars which have been wrecked by my running of the council’s business. When we looked at it, we cannot take a loan neither did we have the money to buy it in bulk. So ALGON independent of the state government entered into an agreement with a Car dealer who supplied us (individual councils) the Camry Cars and we spread the payment for a period of time. The total amount inclusive of Tax and VAT is Seventeen Million Naira (N17,000,000.00) and we were to pay in installments.

“On my own part, I paid from the IGR and Bio-Metric refunds in installments and that was how we were able to offset it. As at today, we have just the last tranche to clear. I want to state it clearly, that the state government did not buy cars for council chairmen. It is untrue that nine council chairmen in particular were given cars by the state government for whatever reason, rather council chairmen entered into agreement as a council with the car dealer who supplied us with the specified official car and we are making payments in installments. Some councils have finished paying and some have not finished paying. What I am saying is the true position and it stands to be investigated and if you get any contrary information, come back to me.”

“I want to say that is a total lie, that is not true to the best of my knowledge. I happen to be the secretary of ALGON in this state, there is no document signed by ALGON or council chairmen with the Governor to return anybody and the governor has said it times without number that there will be no imposition, that all of us will go through the process of getting the ticket.

“I want to say that if you are working, if you have served as a council chairman, people know whether you have done well or you have not done well. We have every right as council chairman to have a second tenure by the law as it exists today. So when the timetable comes up, we will throw ourselves to the ring and test our popularity and I believe that whatever that we may have done, will speak for us for good or for bad. But as for being imposed, or having a document with the governor, that is not true and that is a lie from the pit of hell and it should be discountenanced.”

Obusom further highlighted some of his achievements in the past Two and Half years in office to include the establishment of a thorough and refined mechanism for identifying true indigenes of Oshimili South, revamping of the IGR source in the Local Government Area, building of a twin revenue court and the purchase and installation of a 13KVA transformer to power up the secretariat.

Other successes recorded are in the areas of starting a poultry farm with the 2% allocation which the law requested of the council to set aside for agriculture, grading of earth roads, provision of farm seedlings to farmers at the Oko axis of the Council Area made possible by SURE-P and the construction and subsequent commissioning of the Ogbogonogo Mini market with over 300 shops.