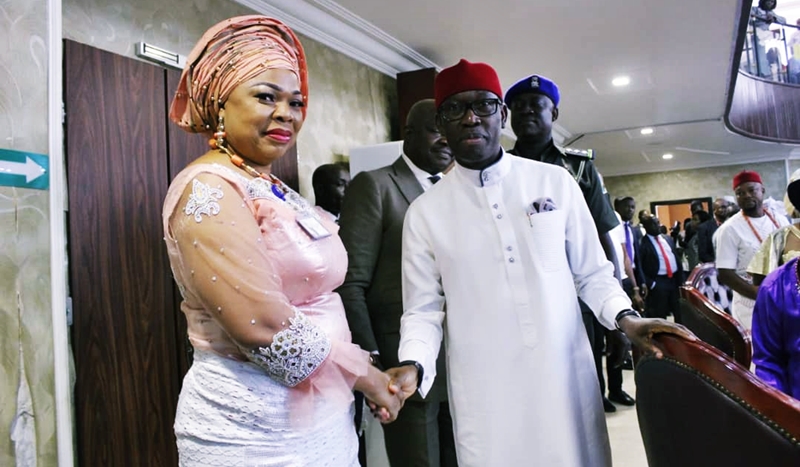 The Member representing the Aniocha South Constituency in the State House of Assembly, Honourable Angela Nwaka has called on the people of Aniocha South to come out enmasse to appreciate Governor Ifeanyi Okowa as Anioma nation honours him tomorrow.

Honourable Nwaka who stated this while speaking on the programme scheduled to hold tomorrow at the Cenotaph, Asaba said Governor Okowa had redefined development in the state with his massive developmental strides across the state.

The Lawmaker said the the best honour to give the governor was their presence hence the need for them to come out enmasse to honour him, adding that the governor’s developmental strides was clearly evident in Aniocha South.

Hon Nwaka noted that the re election of Governor Okowa in 2019 was an Anioma project addding that all sons and daughters of Anioma extraction should take it as their personal project because the governor had made the people proud and deserved another term to consolidate on his achievements.

The Lawmaker who is the Chairman House Committee on Education, stated that Anioma nation was proud of the achievements of Governor Okowa within the last three years and commended the support from the Delta Central and South Senatorial districts to the Okowa led administration.

Hon Nwaka maintained that the recognition on Governor Okowa by Anioma nation was well deserved as he has proved to be a true son of Anioma nation and commended him for his vision as encapsulated in his SMART agenda.

She explained that the grand reception will afford the people yet another opportunity to reaffirm the high confidence reposed on Dr Okowa, stressing that he would remain a great ambassador of the Anioma nation and the state in general.

Hon Nwaka noted that across constituencies and communities in the state, the Okowa’s administration had embarked on one or more development projects, stressing that it takes a seasoned administrator and focus leader to attain what the governor had achieved in less than three years.

The Lawmaker disclosed that the people of Aniocha South have at several times and fora passed a vote of confidence on the governor and had promised to remain committed to encouraging him to do more for the growth and development of the state.

Hon Nwaka who congratulated Dr Okowa for being so recognized by all ethic nationalities in the state.