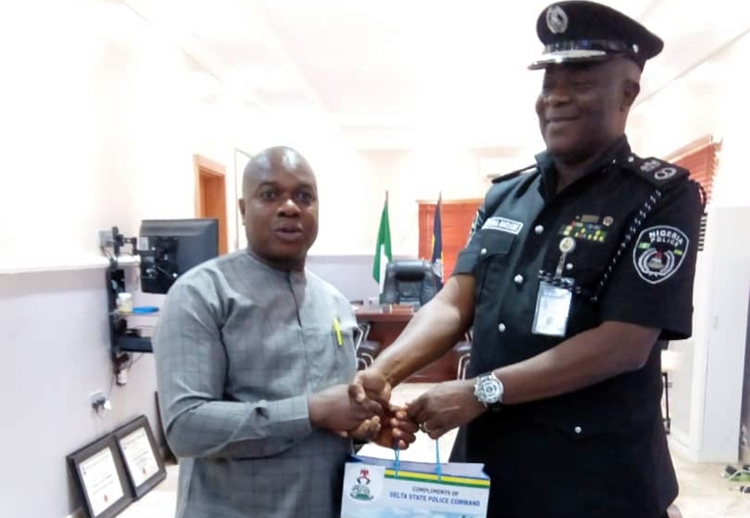 The State Working Committee of the Nigeria Union of Journalists, NUJ, Delta State Council, led by its Chairman, Comrade Michael Ikeogwu has visited the Delta State Police Command with a call on the Commissioner of Police,  Mr. Adeyinka Adeleke, to join forces with NUJ leadership to rid the profession of quacks.

The visit which took place on Thursday 4th July, 2019, was basically anchored on the usual Council’s familiarization visits to heads of security agencies in the State to seek symbiotic working relationships and synergies in the line of duties, according to the Chairman.

Ikeogwu also used the opportunity to clear the air on the unfounded rumour that the leadership of NUJ Delta State Council, was having problem with the CP Delta State Police Command, saying that there was no iota of truth in that rumour.

He equally implored the CP Adeyinka to strengthen the office of the Police Public Relations to enable it always respond to situations under emergency, adding that the office is key to enhancing the working relationship of Journalists with the police.

While commending the CP for the initiative to do the needful by calling the Union’s leadership to familiarise, discuss and streamline areas of mutual concerns, Comrade Ikeogwu appealed to the CP to caution his officers and men to stop harassing and molesting Journalists while on duty.

Responding, CP Adeyinka Adeleke appreciated the State Executive of the NUJ for honouring the Command’s invitation to discuss on issues of working partnerships and synergies.

He however, tendered an apology on behalf of the Command for their procedural error, which led to the Command putting the cat before the horse.

He said as a practical officer who has worked with the media at various levels, he would not ordinarily override the Union in dealing with its members, knowing the Constitutional empowerment to the NUJ as umbrella body of all Journalists.

He again apologized to the Council to tamper justice with mercy by forgiving those of her 25 members that flouted the Council’s orders to attend a police function at the Officers’ Mess, Okwe.

Speaking further, the CP assured the NUJ of the Command’s cooperation and the need to strengthen the office of the PPRO to respond faster to journalists even though they also have their modules of operation.

In terms of molestation, the CP said people in various groups and organisations behave differently and the police is not an exception. He promised to continue to address the issues of misconduct, professional and public abuse on the part of the police.

Above all, the CP assured the Union of his cooperation to rid the State of quacks and fake Journalists, maintaining that his men are ever ready to respond to calls from the NUJ to arrest and prosecute impostors who had continued to give the media a bad image.