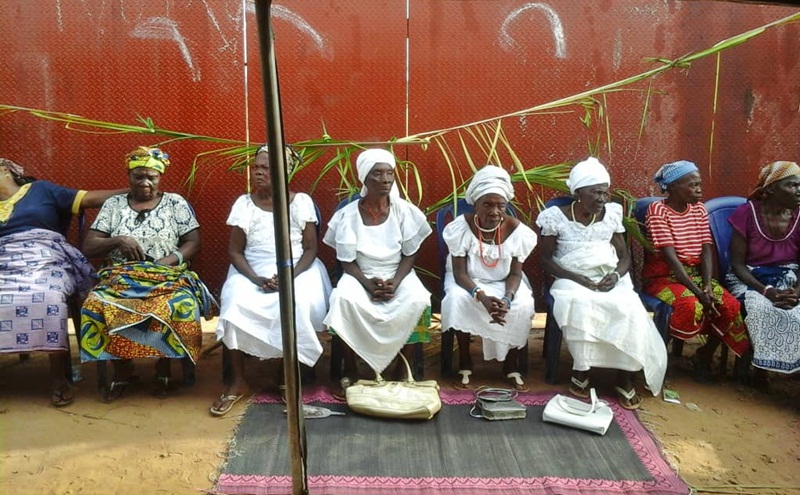 The Ogbeani community who protested to the premises of the project on Wednesday, April 3, 2019 barricaded the entrance of the company, chanting solidarity songs. The protesters who made up of aged women, elderly men, youths and women, demanded that work will not go on until the management of the company meet the agreement reached with them before the commencement of the project.

The protesters who were carrying placards with inscriptions: “Stop the division amongst our brothers, The Ogbeani’s are not stupid but rather law abiding people of Delta, We were peaceful community before you came, The youths need jobs so we can be able to feed our family, lamented that since the company came on board, the community have not felt their impact in a positive way.

Lamenting their ordeals during the protest, Chief Daniel Oba-Ogu, the Chairman, Community Development Community CDC, noted that in January 2018, the company acquired an area of land measuring 81.767 hectares with promises of contracts, job slots, cash compensation to the donors of the land.

He said based on the arrangements, the said land was acquired while clause 7, of the agreement stated that the acquisition of the land shall be governed by local content policy and that a Memorandum of Understanding MoU, shall be mutually agreed and signed by both parties.

“Right from the inception of the project we agreed to have MoU but the company have been averting it in order to continue to cheat the community, they refused to do things that are accruable to the community they are not doing them. During the construction of tanks farm they brought in 40 Indians no workers from our community, they keep making promises.

“They don’t want to carry the community along rather they are causing trouble and trying to divide our community. When we go for meetings with their representatives they will tell us they don’t have the power to decide that is why we are carrying out this protest so that those who can take decision and implement them will come out to meet with us. They should give us our quotas from the jobs available.”

Mr. Lucky Ojumah, the Public Relations Officer of Ogbeani community, equally regretted that the company has reneging on the promises made before the commencement of the project and urged the company to retraces itself for the interest of both parties.

He observed that the catchment area deserved the rights for maximum benefit as stipulated by the Local Contents Act, noting that they have written several letters to appreciate quarters in search for peaceful resolution to the issues.

“We have so many professional here in oil and gas including well trained welders and filters that have the requisite experiences but they won’t engage us rather they import Indians. The two storage tanks they completed no Nigerians or indigenes worked with them. They promised to carry the community along when they took over our lands.

Meanwhile, efforts made to reach the Community Relations Officer of the company to speak on the matter proved abortive but one of the Chief Security Officer who pleaded for anonymity, pleaded with the protesters to give room for dialogue, explaining that every issue will be resolved.