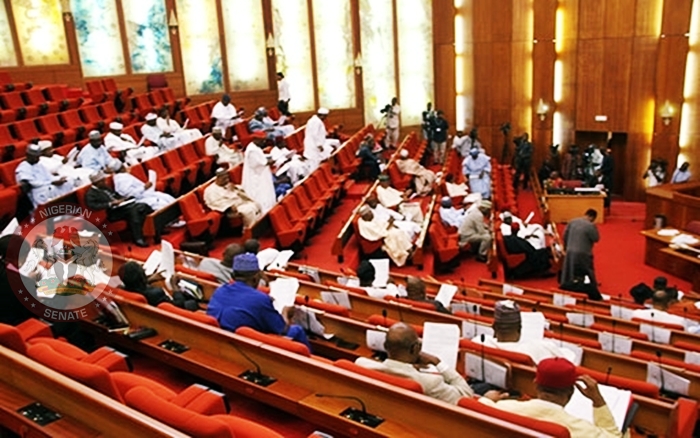 The Senate today stood down the confirmation of 27 Resident Electoral Commissioners (REC) for two weeks.

This was in protest of what the senate termed disregard for decisions of the National Assembly particularly the Senate with particular reference, senators who contributed expressed displeasure that the Presidency was yet to take a decision on the Acting Chairman of the Economic and Financial Crimes Commission (EFCC), Ibrahim Magu.

They warned that the current action of the executive was setting a wrong precedence and was a threat to the nation’s democracy.

Sen. Peter  Nwaboshi said recent comments by Prof. Itse Sagay, Chairman of the Presidential Advisory Committee on Anti-Corruption, on  the senate’s  power to confirm nominees of the president was uncalled for.

“Prof Sagay said the senate merely confirms. This  is unexpected of a professor of law, a Senior Advocate of Nigeria about such a big body.

“You can imagine the type of advice this kind of person is giving to the President. We can’t destroy democracy because anybody thinks only their believe should subsist.

“When they denigrate or disrespect  an institution of  this caliber  it is worrisome.’’

The senator therefore moved for the suspension of consideration of the the request of President Buhari for the confirmation of Resident Electoral Commissioners.

He said that the suspension should last until such a time when the Senate is recognised as an arm of government and its powers are also respected.

Sen. Matthew Uhroghide said the  laws establishing the agencies  of government  showed clearly that heads of the agencies and some officers needed to be confirmed by the National Assembly.

According to him, disregarding the senate is worrisome because  it is the statutory role of the legislature to so.

“If by chance names are not confirm, President is at liberty to re-nominate but the National Assembly  has to be properly briefed.

Recently we took a decision on some  nominees  of the President but we don’t know what happened.

“ Some of these people cannot be acting. Unfortunately Mr Ibrahim Magu is still acting as EFCC Chairman.

“If the President knew he was not going to honour our stand he should not have sent his name.

He also called for the suspension of the president’s  request  to send the message that the National Assembly was a serious body that should not be disregarded.

The Deputy Chief Whip, Francis Alimikhena  said Mr Ibrahim Magu, who ought not to be working in acting capacity after his rejection by the Senate, was still doing so.

He further said“ Magu is terrorizing us because  we disqualified him. This request should be stood down to send a strong message to the executive that the institution cannot be ridiculed.’’

“If the Senate is ridiculed our institution has been ridiculed, we will try as much as possible to promote this institution,” said Senator Anyanwu.

However, Sen. Adamu Aliero pleaded with lawmakers to consider the request in view of their importance to the 2019 general elections.

He said, “the submission of the REC list is important if not INEC will not be ready for the election.

Also, the Deputy Leader, Bala Na’Allah pleaded with the lawmakers to consider the list for confirmation

According to him, we must show a level of maturity rather than declining on our duty because of the actions of the executive.

The Deputy President of the Senate, Ike Ekweremadu, said the senate was not responsible for the delay in the appointment of the commissioners, as their positions had been vacant for about a year.

“If there is any delay it is not from here. The executive knows the positions were vacant, so it is not our fault.

“Under the Constitution, if the President is travelling he can write to us and his Vice  would act in his absence.

“Also if Chief Justice of Nigeria  is unable to perform his duties, the President can appoint the person next in line.

Outside that, no position in our law has that privilege. I stand to be corrected. Those that drafted the Constitution are not stupid, so we must be seen to be defending our constitution.

He, however pleaded that the lawmakers should heed to the appeal of some of the lawmakers for the list to be suspended pending when the senate communicated with the President on the matter.

ALSO READ:  (THE ARENA) NDDC Board Screening, Confirmation: The responsibility and Honour of Senate to do the Common Good

“I appeal that we leave it for one week or two for the President of the Senate to convey our grievances to President Buhari.

In his remarks, the President of the Senate, Dr Bukola Saraki pleaded with the senators to only suspend the consideration for a few weeks, rather than refusing to consider it.

While he shared in the sentiments of the lawmakers, he pleaded with them to agree to its suspension  pending when the matter was resolved.

“This matter needs to be resolved  for us to go forward. If I put a question is obvious we all want the list to be stood down  but can we stand it  down for a week?

“Since today is Tuesday, we can leave it till  next week Tuesday. I’m appealing to you.

When the question was put forth, the senators stood it down for two weeks.

This comes barely a week after the Senate President, Dr. Bukola Saraki, read a letter seeking the confirmation of 27 nominees for the position of RECs in the Independent National Electoral Commission (INEC).

The letter was dated February 27, 2017, and signed by the Vice President, Professor Yemi Osinbajo, while acting as Nigeria’s President.

The list, which asked the lawmakers to consider the nominees for the positions, had eight former RECs who were reappointed and 19 new appointees.