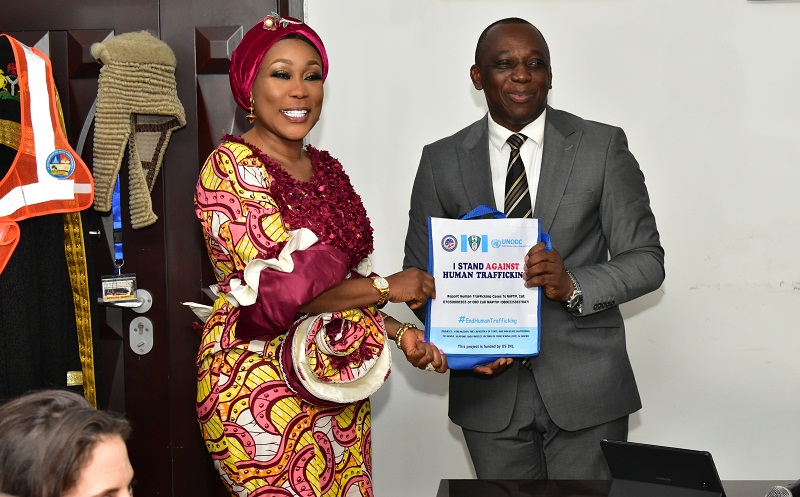 The Delta State Governor, Senator Dr. Ifeanyi Okowa has received commendation from the National Agency for the Prohibition in Trafficking in Persons, NAPTIP for his massive support against human trafficking and irregular migration menace that was prevalent in some parts of the State.

The Director-General of the Agency, Dame Julie Okah-Donli made the commendation during an interactive meeting between the Agency and the Delta State Task Force on Human Trafficking and Irregular Migration headed by the State Attorney-General and Commissioner for Justice, Mr. Peter Mrakpor.

Dame Julie Okah-Donli also applauded the Chairman and Members of Delta State Task Force on Human Trafficking for its sensitization and awareness campaigns and charged the task force to put machineries in place for the inauguration of the Task Force at the local Government level even as she advocated for more collaborative joint programmes between NAPTIP and the State Task Force on Human Trafficking in areas of joint operations and sensitization awareness campaigns.

The Chairman of the State Task Force, Mr. Peter Mrakpor had earlier told the NAPTIP boss and her team including the representative of the International Organization for Migration (IOM), United Nations Migration, Saskia Kok that the State Task Force was not relenting in its avowed commitment in winning the war against the menace.

Mr. Mrakpor assured the D-G that their request for office accommodation for NAPTIP effective operations in State would soon be met as soon as the new ultra-modern State Secretariat Complex was completed in few mouths time, adding that the completion of the new secretariat complex would pave way for several MDAs to relocate to the new complex that would subsequently free up several offices presently occupied by Ministries, Departments and Agencies of Government.

The Chairman while assuring the Director-General of NAPTIP that the Delta State Government will not relent in its fight to stamp out the ugly thread, informed her that a Delta State High Court sitting at Ogwashi-Uku recently convicted a child trafficker to prison for the offence of child trafficking.

Also speaking was the State Commissioner for Information, Mr. Charles Aniagwu who is also a Member of the State Task Force, disclosed that the Task Force had to rejig their strategies and mapped out a well detailed work plan on how to actualize their mandate which include effective collaboration and engagement of traditional rulers, community leaders and religious organizations.

Aniagwu also disclosed that the State Bureau for Orientation was at the forefront of taking the anti-human trafficking message to every nook and crannies of the State and advised youths to be weary of the inordinate crave to travel abroad to seek for greener pasture which according to him was non-existent.

He listed some various youth empowerment programmes of the State Government including the Skill Training and Entrepreneurship Programme (STEP) and Youth Agricultural Entrepreneur Programmes (YAGEP) as well as the establishment of Technical Colleges and vocational Centres across the State and charged youths to take advantage of these empowerment programmes to better their lots.