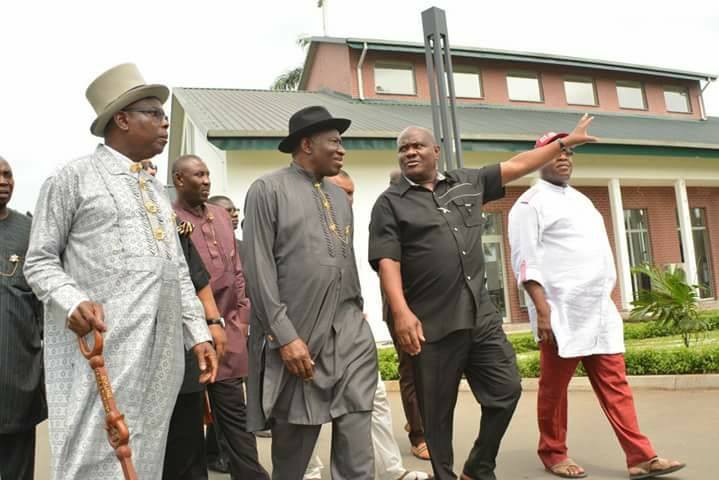 Addressing journalists at the Government House, Port Harcourt after inspecting projects being executed by Governor Wike, the Former President stated that Wike is a worthy representative of the PDP.

He praised the governor for keeping the torch shinning by his exemplary performance, which has justified his election by the people of Rivers State.

Former President Goodluck Jonathan noted that Governor Wike’s outstanding performance has become the common story across the country, pointing out that he has been hearing about the good works of the governor for sometime. He said the governor has lived up to his reputation.

He also noted that since Governor Wike was sworn in, Saturday was his first time of driving round Port Harcourt. He expressed satisfaction with the quality of transformation he witnessed enroute the Government House, Port Harcourt.

“First, I heard so much, people have told me of the changes in Port Harcourt. I was told that I can’t even recognise the roads to where I used to live . As we drove into the city, I noticed that he has done very well in various areas.”

Former President Jonathan stated: “One thing I must commend Wike is that he has positive traits. I always believe that wherever you find yourself, add value. Governor Wike has added value in Rivers State. He has done well to show his signature.

“Wike has taken us round. We have seen how he has transformed the Brick House and maintain that Brick House. We saw the changes he has made in some places in the Governmenr House, including building an amphitheatre, a new chapel for worship, relaxing places and general beautification.

“If you are the Chief Executive of an institution, you stay for two years and you add no value, then you have no vision. Wike is doing well and we commend him. He is a good representative of the PDP who is committed to developing his people.”

He thanked Nigerians for appreciating his contributions to the development of the country, even after he left office.

Speaking while conducting the Former President round the projects at the Government House, Port Harcourt, Governor Wike said his commitment is to lift the state to higher heights.

He noted that the Old Brick was restored with certain additions because of the need to preserve history of governance in the state.

The governor noted that the New Amphitheatre being constructed at the Government House would host high profile guests who visit the state.

According to him, the New Government House, Port Harcourt Chapel which will host about 300 persons would provide a venue for interdenominational Christian Worship.

He thanked the Former President for the visit , assuring him that he will continue to live up to the expectations of the people.