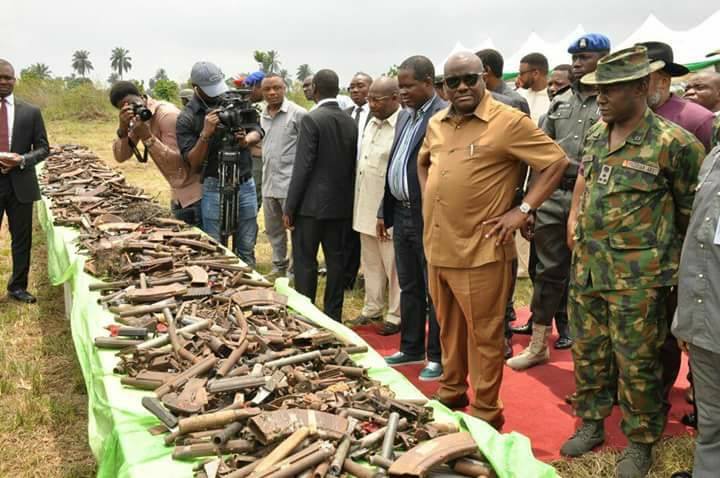 Rivers State Government and the Nigerian Army  have commenced the destruction of arms and ammunition recovered from the 60 days disarmament event of the State Amnesty Programme.

Governor Nyesom Wike who was present at the destruction site further directed Security Agencies to liaise with the State Government to package a special amnesty programme for cultists and militants for the Ogoni speaking local government areas of the state.

Speaking after the commencement of the destruction of arms and ammunition recovered during the 60-day disarmament event of the Rivers State Amnesty Programme at the Igwurata Shooting Range in Ikwerre Local Government Area on Friday, Governor Wike said that his administration will work with stakeholders to ensure calm is restored across the troubled Ogoni communities.

He said that other parts of the state cannot be enjoying peace, while cultists continue to disturb the peace of Ogoniland.

He said: “I direct the security agencies to work with the Special Adviser on Amnesty to work out a special amnesty programme for Ogoniland. We will ensure that Ogoniland is crime free.

“We must ensure that calm returns to Ogoniland just as we have in Port Harcourt and its environs “.

It will be recalled that the last Amnesty Programme was not successful in Ogoniland as cultists and militants in the area refused to key into the programme.

The governor said that the Amnesty Programme partnership was initiated by the State Security Council, but regretted that a particular security agency attempted to sabotage the programme.

The governor stressed that the programme was strictly for security reasons. He said those who attempted to politicise the programme, are enemies of Rivers State.

He said: “Good governance is when you give your people peace. It is when you create the right atmosphere for them to move around and engage in their legal endeavours “.

He commended the security agencies and assured them that his administration will continue to fund their operations to consolidate the peace in the state.

In his remarks, Special Adviser on Amnesty to the Rivers State Governor, Mr Ken Chinda said that the weapons slated for destruction were those recovered during the 60-day amnesty programme between September 16, 2016 and November 15, 2016.

He said that the public destruction exercise was done in line with approved international standards.

Also speaking, Officer In Charge of Disposal of the 6 Division of the Nigerian Army, Lt Colonel Mohammed Bremam explained that all the weapons were shredded while the explosives and ammunition were destroyed.

Highpoint of the was the flag off of the destruction of arms, explosives and ammunition by Governor Wike. He was supported by the Speaker of the House of Assembly, Mr Ikunyi Ibani and top government officials.

A total of 911 arms and 7661 ammunition were successfully destroyed.