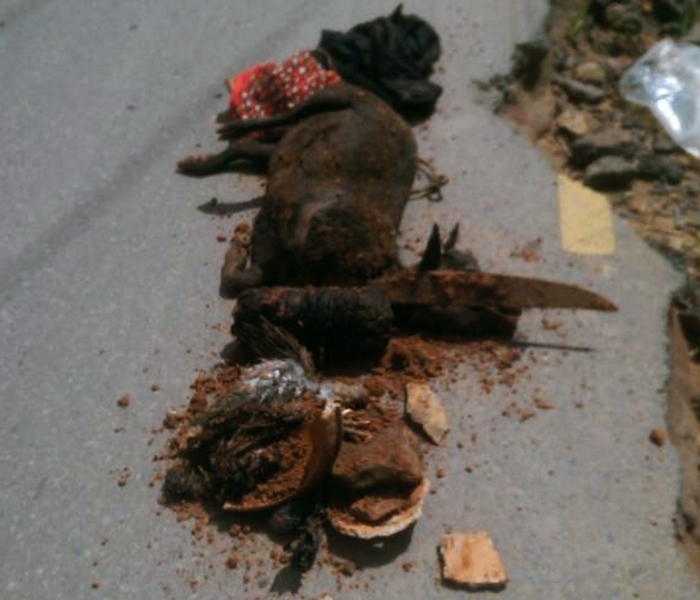 In a report by Anambra Online reveals that, what could have breached the palpable peace in Ukpor town, Nnewi South LGA, Anambra state was averted on Sunday, June 18th when a ‘whistleblower’ revealed to a particular family who owns a farmland at Umudim village, beside Gate of heaven mortuary, along Onuselogu road that he saw a man (name withheld by us) burying what looked like dangerous charms in their farm when he decided to answer the call of nature in the bush.

The owner of the farm immediately alerted his son who resides in Onitsha of the development.

According to our correspondent, before 7am on Sunday, his son arrived Ukpor in anger and vowed to deal with whoever carried out the act. The whistleblower was called upon and reminded about the consequences of false information but he swore with their village deity that he saw the man burying the charm.

Just like a scene from a Nollywood movie, the owner of the farm with his son accompanied by few other people immediately proceeded to the house of the man who was accused of burying the charms.

On getting there, the man denied the allegations but claimed that one of his friends from Nnewi convinced him to use the place for “something he wasn’t aware of” the previous day.
A delegation was sent to Nnewi to get the man but he was said to have absconded when he saw a mob approaching his house menacingly.

The accused was queried on why he allowed someone to make use a land that doesn’t belong to him but he claimed the man said he saw something interesting in the land and that’s probably why he decided to use it.

In a twinkle of an eye, the “whole of Ukpor” gathered in Umudim waiting for the drama to unfold.

The youths equally gathered in their numbers and threatened to beat him up if he didn’t want to say the truth.

Our correspondent said the man later confessed that he actually buried the charms there with the help of other 3 native doctors which was eventually exhumed.