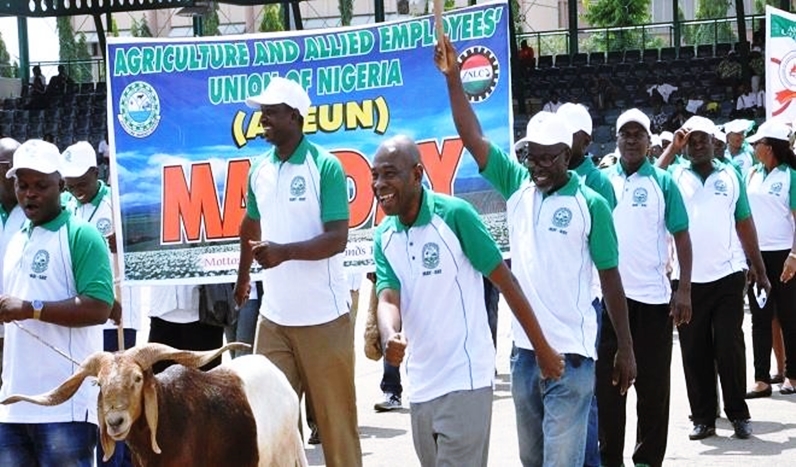 The Agriculture and Allied Employees Union of Nigeria (AAEUN) Edo state council has threatened to drag the Environmental Right Action/ Friends of the Earth Nigeria (ERA/FoEN) to court for allegedly making allegations against Okomu Oil Palm Company Plc that could lead to the retrenchment of its over 3000 members working in the company.

Addressing a press conference in Benin, Comrade Benson Imasuen, Edo State Chairman of the Union said the union has been inundated with allegations made by the Environmental Right Action/Friends of the Earth that 60,000 people are at risk of deforestation as a result of Okomu Oil Palm Company activities in the area.

Comrade Imasuen challenged ERA/FoEN to show to the world statistical proof of how 60,000 persons were displaced by the operation of the Palm oil Company without attracting the attention of the Federal and Edo State Government or international communities.

According to AAEUN Chairman, the union felt compelled to challenge ERA/FoEN this time around because a lie repeatedly told is often misconstrued as the truth, as in June this year, this same  NGO rented  a crowd to stage manage a protest against Okomu Oil Palm Company who currently employs more than 3000 of our members.

“The allegation by ERA is not only baseless but also unfounded and we want to put them on notice that we are already talking with our national headquarters to obtain approval to drag ERA before a law court of competent jurisdiction to prove their claim that over 60,000 people across 30 communities risk impact due to deforestation occasioned by Okomu activities.

“This is a deliberate misinformation and misrepresentation designed to bring potential job loses to our members as well as a calculated attempt to drag the name of the company to the mud as the state union (AAEUN) is a major stakeholder in Okomu Oil Palm Company”.

Imasuen also pointed out that the trade union has the customary duty to defend and protect the oppressed, particularly as over 50 percent of its union members are indigenes of the various communities mentioned in ERA’s field report as well as being employees of the Okomu Oil Palm Company.

“The federal Land Act vested ownership of all land to the State Government, and it has full control of all forest reserves within the state. It is thus interesting to note that an NGO that claims it has the interest of forests at heart, should state that 60,000 people are at risk of deforestation as a result of Okomu, when they know full well that Okomu Oil Palm has been farming strictly within a portion of the respective forest reserves in question that were officially ‘re-reserved by the state government initially for other companies between 10 and 20 years ago, as a result of their degraded nature, mainly due to the illegal encroachment into the forest reserve by farmers and illegal logging.”

“These de-reserved land areas were then transferred legally over to Okomu in the recent past by immediate past governor of the state.

The union chairman disclosed that Okomu Oil Palm Plc has in its last financial year spent over N240million on its host communities for development projects, Scholarship/Bursary awards and youth skills development programmes.

The union leader also revealed that the union is in possession of several copies of letters of appreciations duly signed by leaders of the various communities, thanking Okomu for bringing development to their communities.

“These letters are also available together with photographic evidence on the company’s website and facebook pages, as well as the company’s environmental dashboard”, he stated.

According to him, ERA/FOEN should also understand that at least 50 percent of our members are indigenes of the various communities mentioned in their field report, as well as being employees of the Okomu Oil Palm Company.