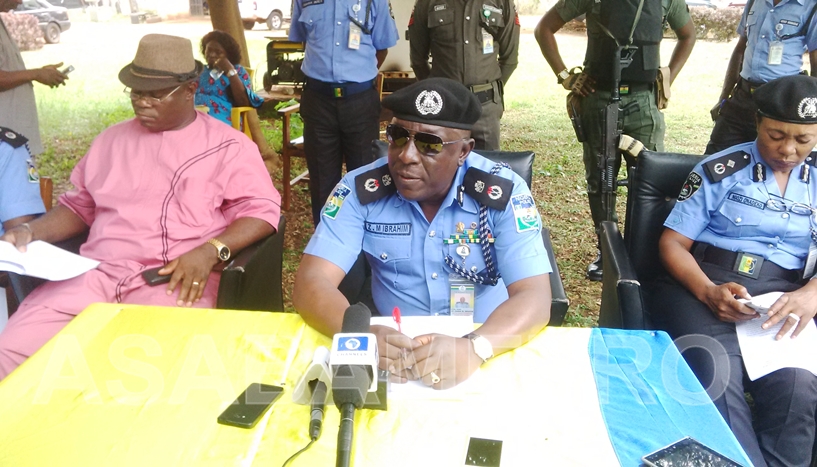 The Delta State Police Command has assured Deltans and residents in the state of adequate protection of their lives and properties during the forth coming Local Government Council Elections, promising to partner with the electoral body to ensure a credible election.

The Commissioner of Police in the State, CP Zanna Ibrahim gave this confidence during a press briefing at the Command’s Headquarter in Asaba, warning politicians to avoid the temptation of using thugs in disrupting the electoral process.

Ibrahim said, “On the forth coming local government elections which is slated for January 2018, preparations are in top gear to ensure that it is going to be successful but I want to plead to politicians to ensure that, the electioneering that is ongoing should be rancor free and violent free. They should not use thugs for electioneering because definitely if they do that, the long hands of the law will catch up with them and we are not going to spare them. So that is a warning for politicians to play the game according to the rules.”

While commending the new leadership of the Delta State Independent Electoral Commission (DSIEC), CP Ibrahim assured that the Police Command will do its best in ensuring a transparent election is achieved in Delta State.

“With the appointment of a seasoned chairman in the person of Chief Michael Ugbodu, a retired Commissioner of Police, I am sure that we are going to have a new lease of life in that very important organization. We are going to assist the reinvigorated Delta State Independent Electoral Commission in manners that are available to us, to conduct a transparent and credible election come January 2018.”

Disclosing the plans of the Security body for the end of year festive period, “ember months”, the Delta State Police boss stated that with the setting in of the ember months, a period that is usually characterized by a lot of activities and movements of people/goods, and possible rise in crime wave, the Command has adopted several measures towards ensuring peace, safety and security during the period and beyond.

In his words, “Let me use this opportunity to affirm that we count on the cooperation of members of the public in achieving our objective of making Delta State safe and secure for all. I therefore urge the public not to hesitate in giving the police and other security agencies in the state, timely and useful information, and all necessary support and assistance.

“The Command is in liaison with communities along the  highways to clear overgrown grasses, in order to prevent criminals from finding easy cover or hideout, and to help motorists have clear, and unhindered view of the highways.

“Our men have been instructed to embark on vigorous Stop and Search across the highways in the state, in order to make the roads safe for road users and as a means of checkmating the movement of hoodlums.

“Another deliberate strategy we have adopted in check-mating criminals and their activities is constant raids of identified black spots and criminal hideouts. To this end, the Area Commanders and Divisional Police officers have been directed to carry out unceasing raids of criminal hideouts in their areas of responsibilities as a means of preventing criminal elements from having any hiding place in all parts of the state.

“The Command is in synergy with relevant traffic management agencies in the state such as the Federal Road Safety Corps (FRSC) and Delta State Transport Management Agency (DESTMA) to ensure that the usual heavy traffic experienced by travelers passing through the state to neighboring cities is eased.

CP Ibrahim declared that based on the statistics at the moment, crime rate in Delta State is on the descending side. “We are reassessing our successes and were we have failed, we will improve so that the ember months will be more successful than that of last year,” he assured.