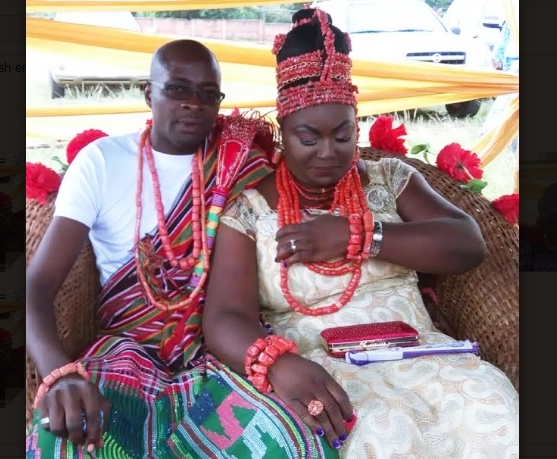 It was a parade of panache and splendour at the wedding of two ace journalists, Ivy Adodo and Patrick Ebojele, Saturday, 1st July, 2017 at Iruekpen, Esan West Local Government Area of Edo state.

Chairman of Edo state council of the Nigeria Union of Journalists, NUJ, Sir Roland Osakue led other journalists to honour two of their own who tied the nuptial knot.

The marriage which was conducted in accordance with Esan native laws and customs took place at the bride’s family house at Iruekpen saw the patriarch of the Adodo family of Iruekpen, Comrade Didi Adodo, hand over Ivy to the Ebojele family of Irrua.

Chairman at the reception which took place at the Central Primary School, Iruekpen, the Speaker of  Edo State House of Assembly and chairman at the occasion, Justin Okonoboh, pointed out that the institution of marriage is ordained by God assuring  the couple it has been blessed by Him and admonished them to play by the rules.

Father of the bride, a former Commissioner in Edo state and now General Secretary of the United  Labor Congress, Comrade Didi Adodo adviced the couple to respect one another stating that they are now one.

High point of the occasion was the couple’s nuptial dance with the deputy Speaker of Edo State House of Assembly, Hon. Elizabeth Ativie, Majority Leader  of the House, Hon. Folly Ovedegbe and other members of Edo House of Assembly.

The bride, Ivy is a staff of Edo Broadcasting Service, EBS, and presently the press secretary to the deputy Speaker of Edo State House of Assembly, Hon. Mrs Elizabeth Ativie, while the groom, Patrick Ebojele is a former Correspondent of the Champion news paper in Edo state and now a lecturer in the department of Mass Communication, Federal Polytechnic, Auchi.

All media workers in the state were in attendance to honour two of their own.

Guests were treated to lavish entertainment amidst music and dancing.