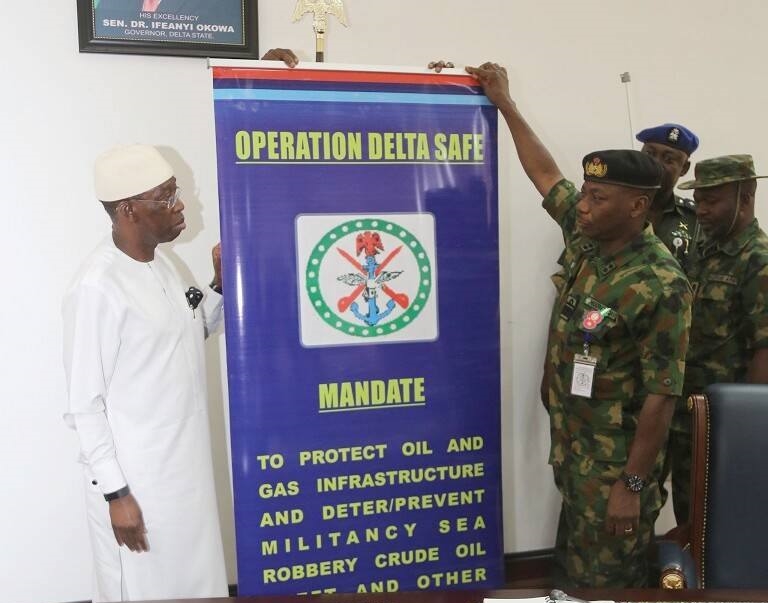 Receiving the team at Government House Asaba, Governor Okowa said that Delta State Government is in support of security agency’s activities in tackling criminality and pipeline vandalism. He noted that crude oil theft and pipeline vandalism affect first the economy and environment of the surrounding communities and the federal and state government negatively.

“Since the inception of your Operation Safe, a lot of work have been done, in Delta State we have worked with your sector commander and other security agencies to keep the peace and make the state safe. I want to assure you of the state government support to carry out your activities in the Niger Delta region”, he said,

The Governor stressed that the partnership and synergy among security agencies in the state have yielded desired result in the maintenance of peace and security.

“We need to check crude oil theft and vandalism as the activities of vandals first impact negatively on the environment, economy and health of the surrounding communities, it also impact negatively on the resources of the federal and state government and power generation in the country. This in turn set up a chain of events as that impact on our industries and of course youth employment”, the governor added

While calling for constant consultation between government and the Operation Delta Safe Outfit, Senator Okowa called for the harnessing of the civilian population in the Niger Delta region in information gathering.

Earlier, Rear Admiral Suleiman said that they were in Asaba to consult with Governor Okowa and seek for support for the achievement of the mandate of the Operation Delta Safe Outfit.

He stated that “in achieving peace the Operation Delta Safe require the political support in the protection of the oil and gas infrastructure and prevent other criminality in the region”.