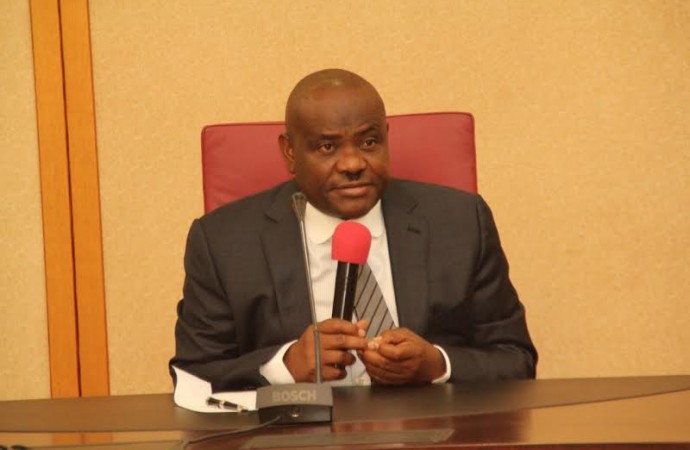 Middle Belt PDP Progressive Youth Forum, a socio-political pressure group made of PDP youths in the Middle Belt region of Nigeria, has lambasted Governor Nyesom Wike of Rivers State over his recent statement, accusing the panel set up by the PDP Board of Trustees (BOT) of Corruption.

The Panel which has prominent leaders of the Party from the Middle Belt region of Nigeria was set up to resolve the Minority Leadership crisis in the House of Representatives.

The group in a strongly worded statement titled, “INSULT ON AYU, MARK, MANTU: WIKE HAS CROSS THE RED LINE, signed by the Chairman, Gabriel Mudgat, Secretary, Alh. Ibrahim Nadama and Women Coordinator, Hon. Liatu Daniel, condemned the statement in its entirety and said that it was an unwarranted abuse on the highly regarded leaders of their region and Political party.

The youths in the statement made available to journalists on Friday 13th September, 2019 in Abuja, described Governor Wike as an irresponsible and disruptive character in party politics who cannot thrive without crisis. “But let it be known to him that the Middle Belt is not part of his political fiefdom. He has certainly crossed the red line by insulting the cream of Middle Belt political leaders and statesmen,” the group stated, warning and demanding, that Governor Wike “must immediately withdraw the defamatory statement against Senators Ayu, Mark, Mantu and others with unreserved public apology”.

The Statement Reads in full:

As a group with a clear mandate to protect and promote the principles of democracy, justice, equity, and the political and socio- economic emancipation of the people of Middle Belt Region of Nigeria as enunciated by the founding fathers of the Region led by the Great Joseph Sarwuan Tarka of blessed memory, we express our utmost displeasure over recent reports wherein the Governor of Rivers State, His Excellency, Governor Nyesom Wike, abused our foremost leaders.

As if that was not enough, he not only congratulated President Muhammadu Buhari, candidate of the APC, on his victory over the PDP presidential candidate, Alhaji Atiku Abubakar, at the Presidential Election Petition Tribunal, even when the party had just indicated that it would appeal to the Supreme Court, but also thoroughly insulted brother PDP Governors. Wike boasted and threatened to deal with the PDP, which built him from the scratch, politically.

Much as we find these statements very distasteful, disrespectful, embarrassing, arrogant, and bombastic, they only go further to affirm Governor Wike as a disruptive character in party politics. To characterise Middle Belt leaders, including elder statesmen, whose political exposure dwarf his, shows that he needs some housekeeping in his political manners.

Now, we are further convinced that Wike is a man, who cannot thrive without crisis; hence where there is none, he creates one. Wike not only levies war on the people of Rivers State, but also does so against anybody that holds contrary views, including the military, parliament, judiciary, fellow governors, PDP, and political chieftains. It is either Wike’s way or the high way.

Governor Wike’s threat to deal with the PDP and PDP Governors further confirms that the evils of impunity of one man dictating the tune and everyone else dancing sheepishly to it, which dethroned the PDP from power, has inadvertently mutated to Rivers State Government House.

Wike’s threats are part of his annoying and erroneous assumption that one state is equal or above the other 35 States and Abuja. Such impressions are a sufficient notice that power should not be concentrated in one hand, especially in a power drunk fellow, for power corrupts, and absolute power corrupts absolutely. Indeed Wike’s reckless statements, excesses, and brigandage are clear pointers to what awaits the nation and the PDP if he finds himself in higher corridors of power and influence, for no nation or party can survive his combined effects of Donald Trump, Boris Johnson, and Buhari constituted in one man.

By threatening to fight the PDP to a standstill, Wike is putting everyone on notice of intention to disrupt the party again and move on. That would be good riddance to bad rubbish. In truth, his character weaknesses, including impunity and hubris have been a heavy burden weighing down the PDP. For instance, he singlehandedly recruited and imposed the former Governor of Borno State with alleged Boko Haram baggage, Senator Ali Modu Sheriff, who almost dismantled the PDP. The same Wike posed as the saviour and gladiator of the PDP in order to impose a National Chairman and convert it to Wike Democratic Party.

If he has the self-proclaimed political Midas touch as he claims, how come it did not come to play in the 2019 general election? Wike was the last governorship candidate to be declared winner despite having no challenger in the real sense of it. But his fellow PDP governors he insults today won their elections or reelection at a go, with some unseating APC incumbents or their anointed ones even without the economic leverage that Wike enjoys.

Lastly, Wike’s uncanny and mischievous congratulatory message to Buhari when the PDP is still going to court is quite remarkable and speaks volumes when viewed alongside his threat to deal with the PDP in 2018 over efforts to shift the venue of the National Convention and Presidential Primary from Port Harcourt. If his congratulation of Buhari is not anti-party, what else is, especially when he has sabotaged the intention of the party to go to the Supreme Court because his congratulatory message is a persuasive authority for the Supreme Court to rule against the PDP?

Wike, the cricket is roasting in the fire, but claims he is emitting oil. But let it be known to him that the Middle Belt is not part of his political fiefdom. He has certainly crossed the red line by insulting the cream of Middle Belt political leaders and statesmen. He must immediately withdraw the defamatory statement against Senators Ayu, Mark, Mantu and others with unreserved public apology. Those, whose palm kernels were cracked by benevolent spirits, should learn to show humility.