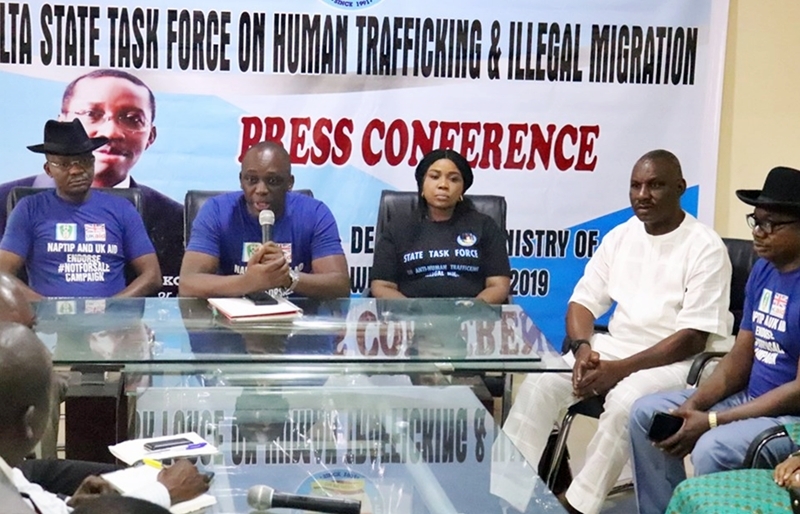 Having recorded several arrests of traffickers in the state, Delta Task Force on Human Trafficking and Illegal Migration have raised an alarm over the influx of traffickers around the state.

Speaking on Wednesday, August 7, 2019 in Asaba, Chairman of the task force, Barr. Peter Mrakpor revealed that several individuals have been nabbed for trafficking around the state in recent times.

He stressed that the issue has mandated the task force to organize a sensitization program, as the State reiterates its zero tolerance against trafficking of any kind.

He then called on Deltans to join them at Interbau roundabout on Thursday, August 8, 2019 in their rally as they seek to create awareness against the menace in the State.

According to Mrapkor, “It is easy to say you are going abroad but what are you going to do. If you can use N1.5 million to travel, you can also use that amount to set up a business in Nigeria”.

Identifying Eight local government areas in the state as harbor for traffickers, he called on Deltans to report any individual seen soliciting for people to travel abroad to security agency.

He also lamented about the poor attitude of parents who release their wards to strangers without undergoing a proper background check on such individuals.

“I can tell you with the information that we have that some persons have been arrested, and they are in the custody of NAPTIP in Benin” he asserted.

He also revealed that the task force would undergo sensitization through town hall meetings to educate the vulnerable.

Likewise, Commissioner of Information, Mr Charles Aniagwu emphasized that the state has chosen a preventive approach to curb the menace, so as to save individuals who have not been such illicit activities.

He then stated that the State Government would not hold back in taking action against those who chose to undermine the law, stating that, some individuals have become hardened, and by so they willingly go against laid down directives.