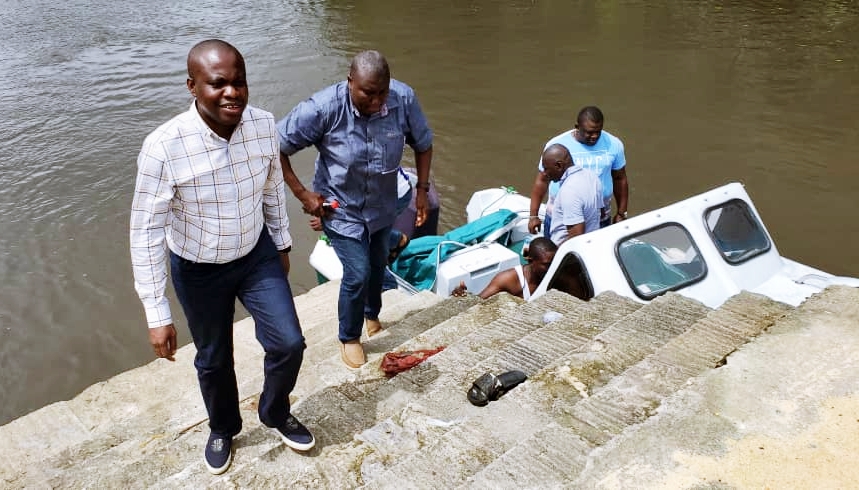 The Executive Assistant to the Governor on Community Development, Hon Andrew Igban says the commitment of the Delta State Government on road infrastructure in riverine communities in the state is to open up the areas for greater development.

Speaking while on working visits to Madangho, Aja-Udaibo, Ogidigben, Deghele and Bateren communities in Warri South West local government area over complaints of deplorable states of internal roads in the localities, Igban assured that the government was not relenting in connecting more coastal communities in the state by roads.

Accompanied by a team of Engineers, the Executive Assistant asserted that Governor Ifeanyi Okowa has shown more commitment to road infrastructure development in the riverine communities in the state.

Hon Igban assured Madangho, Aja-Udaibo, Ogidigben, Deghele and Bateren communities that efforts will be made to draw attention of authorities to the present state of internal roads in the areas, stating that his visit was a step in that regards.

He stressed the need for communities across the state to be at peace with one another and be committed to unity of purpose as they were key to development.

Hon Igban said Governor Ifeanyi Okowa is very much concerned on the well being of Deltans and was taking necessary steps to enhancing quality of lives in the state.

The Executive Assistant who addressed the Youth Leaders of the five communities visited, urged them to continue to mobilize support for state government in its efforts to attracting more dividends of democracy to the people.

The Youth Leaders who spoke including Mr commended efforts of Governor Ifeanyi Okowa towards road infrastructures in the riverine communities in the state and urged him never to relent in spreading dividends of democracy to the people.

They said Madangho, Aja-Udaibo, Ogidigben, Deghele and Bateren communities are major oil producing communities and stressed the need for government to address the basic infrastructures lacking in the areas.

The Youth Leaders decried the state of the roads and the life threatening encroachment of the river into the communities, maintaining that fixing the roads and pilling of the river banks were of paramount importance to the people.

While pledging their continued support to the Okowa’s led administration, the people commended the Executive Assistant to the Governor on Community Development for the visits and appealed to him to make such visits regular to keep track with progress and challenges in the communities.