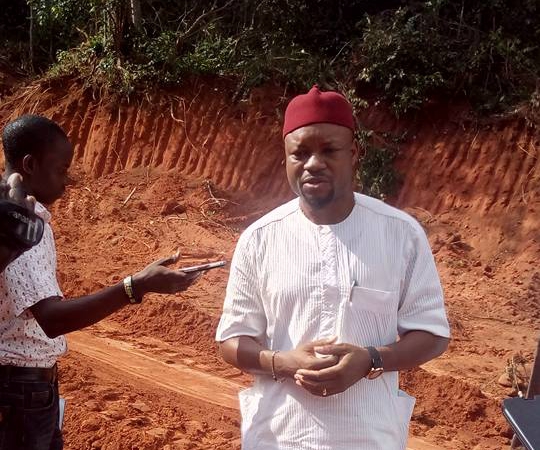 The long awaited reconstruction project of Issele-Uku township road from the Asaba – Onitsha Expressway to NYSC Orientation Camp road has commenced. All thanks to the vibrant legislative influence and lobbying acumen of Hon. Engr. Emeka Nwaobi FNSE, Member representing Aniocha North Constituency at the Delta State House of Assembly.

Hon Nwaobi paid an unscheduled visit to the contractor who has just moved to site, to inspect and assess the velocity of the ongoing project. He was pleased that the project has commenced and assured his gathered numerous supporters and community dwellers that the project would meet specifications.

Engr. Emeka Nwaobi commended the Delta State Governor, Senator Dr. Ifeanyi Arthur Okowa for his honesty and forthrightness in acceding to the plea to urgently respond to the yearnings of the people towards the Issele-Uku township road and several other roads within Aniocha North, adding that it is rare to get such approval from any humane Governor at this time of serious economic crunch.

Nwaobi said that Okowa is indeed the “Ekwueme” that has lived up to his name in deeds and actions. He asked God to bless him more and more with favour and more financial endowments to cite more economically beneficial and people oriented projects in Aniocha North.

In addition, the contractor, Engr. Chris Udobi assured the people of Issele-Uku of a durable and standard road. He said that the road is measured 2.470 kilometres from express to terminate at the Orientation Camp Road, Issele-Uku.

In the same vein, the Honourable Member also visited Ukwu-Nzu community to inspect another massive construction of that road that has been left unattended as old as the community. The road was awarded during Ibori government but was abandoned for over 14 years until Okowa came in and repudiated the contract.

However, Nwaobi maintained that he promised them he would do everything humanly possible if elected to bring the state government to construct the road. He told the Royal Father, “Today, that promise I that I made, I have kept. The road iseasured 2.5 kilometres, leading from Ukwu-Nzu to Obomkpa with two sides drainage system. I hope the community will be happy now; and more importantly pray for Governor Okowa who had made it possible”.

Responding, Obi Ogoh affirmed that Aniocha North Local Government now has a worthy and passionate leader. He said that Ukwu-Nzu community was almost cut off from the rest of the living with a very big gully erosion until Nwaobi came to their rescue by personally working on the road that has made the community visible today.

He stated that with this project now, Nwaobi has created a record that will make it too difficult for anybody to work after him. “He has done what no politician has done in Aniocha North. We have always been deceived with this road. Each time they were coming to do politics with the road the community will cook and dance with the hope that they would soon enjoy an accessible road to the community; but that hope was never realised.

The traditional ruler maintained that to realise this promise now as first of its kind, the community would forever remain grateful to Governor Okowa and Hon. Nwaobi.

“This is indeed the best thing that has come into this community since my 44 years on the throne. The road has been a hindrance to progress coming into the community. Before now the gully erosion that further devastated the road could swallow about three cars. But now we can heave a sigh of relief, all thanks to this honest and God sent man – Hon. Emeka Emmanuel Nwaobi”, he said.