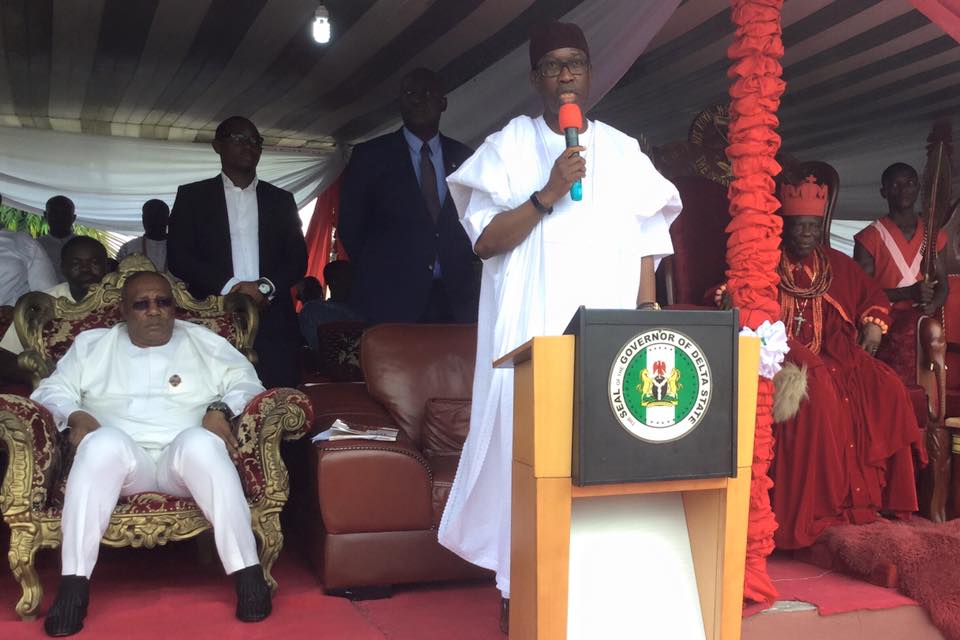 Speaking at the weekend in Orerokpe, Okpe Local Government Area during the Grand finale of the 10th Coronation Anniversary celebration of His Royal Majesty Orhue 1, Orodje of Okpe kingdom, Senator Okowa said that only a peaceful environment would bring development and investment to our society.

Governor Okowa emphasized that the traditional institutions should partner with government to ensure peace and security in their domains and the state at large so that investment and development would thrive.

“I want to urge all stakeholders to join hands in ensuring peace and security in our various communities, I particularly thank His Royal Majesty the Orodje of Okpe for his commitment not only in ensuring peace in Okpe Kingdom but extended same to the state by his fatherly advice. Today the Okpe kingdom have been relatively peaceful in the last one and half years and this have secured oil activities in this axis”, he said.

“Deltans have suffered enough of pipeline vandalism, we should give peace a chance, it has impacted on us negatively and I think we must desist from it” Governor Okowa said, adding “I must thank the Okpe people because they have supported their Royal father to maintain the peace and secured the oil facilities in this area”.

He congratulate the Orodje of Okpe on his anniversary celebration and assuring the Okpe people of more infrastructural projects.

Orodje of Okpe, Gov. Okowa and Speaker Igbuya Engage in a Chat

Earlier, HRM, Orhue 1, Orodje of Okpe kingdom, thanked Governor Ifeanyi Okowa for his show of solidarity, stating that he has demonstrated high morale standard and respect for the Traditional institutions in the State.

He commended him for his youth Empowerment programmes which have turned youths in his kingdom to entrepreneurs and wealth creators.