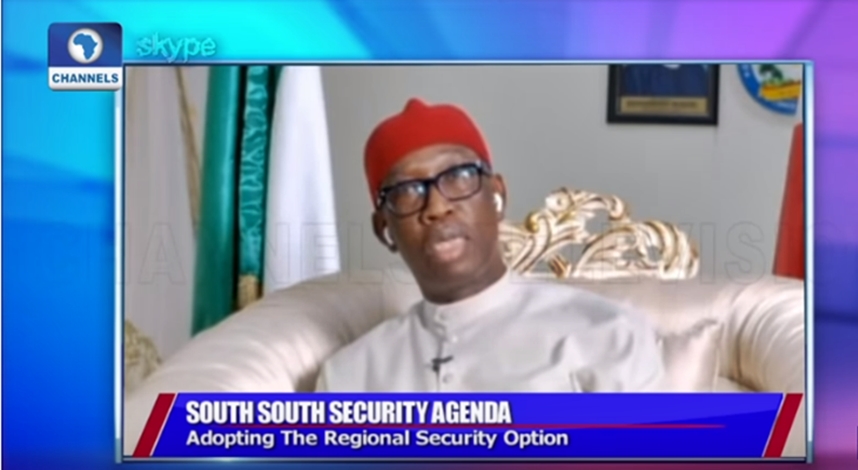 His Excellency the Governor of Delta and Chairman of the South-South Governors Forum, Senator (Dr) Ifeanyi Okowa, on ChannelsTV’s “Politics Today” programme on Sunday, March 8, gave insight on the outcome of Governors of the region’s recent meeting in Asaba. The issues discussed include security, economy, poverty and the BRACED (Bayelsa, Rivers, Akwa-Ibom, Cross River, Edo, Delta) Commission.

Question: What is the necessity for the South-South security initiative and what name are you giving to it?

Okowa: We have not actually come out with a name but we took a long discussion on the issue of having a regional security and we have asked the BRACED Commission, which has been put to a restart, to work out the details and to brief us as quickly as possible.

Question: What necessitated it?

Okowa: Actually, most of the Governors in the South-South region have been working individually as states to curb the various security challenges that we have, but we thought that it would be best as a region if we came together to collaborate with ourselves, realising that we share boundaries, and a situation where, talking about the issue of herdsmen/farmers clashes, they come through similar routes – from one State they can progress to another, and even when you come to the issue of kidnapping which has been a very troubling challenge at the moment, you find people operate probably in Edo and before you know it they are in Delta and in the next couple of days they are operating in Rivers State and it goes that way. So, we thought that if we are able to start a regional security outfit, we will be able to co-monitor and co-share information, working along with the security agencies and put the initial processes that we have as individual states, to be managed as a regional outfit in such a manner that it will become more productive.

Question: Considering the nature of the region, the terrain is quite different from what we have in other zones. For example, we have the water areas and those with land, are you considering different templates for managing the situation?

Okowa: Obviously, we are going to have different templates for managing it. It’s a holistic management; when you come into the waterways, the things that tend to confront you more is sea piracy and illegal bunkering and of course, it’s a different approach in such cases, but the issue is that when we have a shared information and security communication between our various security agencies, communications among our youths, who also help to give us a lot of intelligence information, it will foster coordination of security in the region.

Question: The Coalition of Niger Delta Agitators (CNDA) has criticised the move by the Governors of the South-South to create this security outfit; infact they are accusing some of the governors of corruption, saying the motive behind creating this security outfit is to strike perceived enemies or opposition. How will you react to that?

Okowa: The fact is that whatever you do, even when you mean the best for our states and the best for this nation, you will always have a segment of people turn it into politics and something they will want to criticise you about, but as Governors, ours is to do things in the best interest of the states and in the best interest of the larger majority of the people. We cannot stop people from playing politics out of whatever we do. No matter how right you have it, even if you construct a good road to somebody’s home, because he wants to play politics, he will criticise you. So, we are not going to be deterred by the criticisms of some group of people, but we are elected as governors to do the best we can to secure our people and to bring development to our people and that’s exactly what we are doing and we do not have to take permission from anybody to be able to do what we want to do. As long as we are convinced that having sat in a meeting, we are fully convinced that there is a need to share security approach and the need to support the police, the military, to support them with the civilian outfit that we have in whatever name that you call it so that collaboratively, we can truly become more efficient.

The police and the military already agreed that there is a lot the states are doing individually and that we have been able to bring out youths within our communities who are able to help our system at the moment in bringing out information, gather intelligence and also link them up with where they have to go to, especially in the riverside areas. So, they are quite happy with what we are doing. When we collaboratively work as six states within the South-South region, I believe that we will definitely achieve better results than what we are achieving as individual states; so, we are convinced and we are going ahead to do what we think is right for our people.

Question: Some experts have criticised the approach by Governors in tackling security challenges. They are of the opinion that first and foremost there is need to tackle the issue of poverty; how are the Governors of the region thinking about combating and eradicating poverty because a lot of people in the riverside areas are in abject poverty. Are you thinking about how to take them out of poverty?

Okowa: Definitely yes. I believe that in the last four years, I can speak for most of my colleagues and also speak for my state. We do know that poverty has continued to create a situation in which people don’t find food on their table, and a lot of people are beginning to take to criminality. We are doing all kinds of things as Governors to try to engage our youths; it is not easy because the finances of the nation are still down and the finances of the states have also been equally so badly affected. But, a lot is being done just as we have various empowerment programmes to engage our youths. I am aware that in all the states, youths are being engaged in agriculture, and entrepreneurial programmes are running in all the states and in my state particularly, I am very much aware of that and beyond that, we are beginning to look more into technical education where we are going to continually ensure that our children acquire some skills and not just the paper work in terms of education. We are looking into several means of empowering not just the young boys out of school, we are also empowering the girl-child and our women and these programmes are designed to begin to take people out of poverty. We definitely need a lot more years to begin to take people out of poverty, because we came at a time in 2015, when as you are very much aware that in the first two years, it was very difficult because of the recession we went into and if people believe that we can just re-work the economy within just two years out of recession, then we may not be telling ourselves the truth.

So, we are mindful of this and as we continue with the programmes that we are doing to be able to engage many more youths, we must continue also to tackle the level of insecurity that we have and unfortunately, the issue of the farmers/herders clash that is coming now is actually something very different from the poverty that we find within our people. You find that most of the people that rear the cattle, they are not from the South-South region of the country. That also is creating a lot of problems for us; we are dealing with it in many ways and that is why we also believe that in working together, we can handle this issue a lot better than we are doing at the moment. And when you talk about the issue of piracy, yes, some of our boys are hungry out there, but we are doing everything to engage them and we do not believe that criminality is the way out in trying to solve the problem of poverty. It ought not to be.

Question: The issue of the BRACED Commission seems to have died at some point, now that you are bringing it back what’s going to be the agenda?

Okowa: Talking about the BRACED Commission, it is a functional Secretariat or what you call the working Secretariat for the Governors’ Forum of the region, because the Governors constitute the BRACED Governing Council. We are re-starting it really; it was created in 2010 and it worked up to 2014 and it was slowed down. Unfortunately, I don’t want to look at the issues, but we have realised the importance of the Commission to be able to deal with the issues of insecurity, economy, agricultural development and other sectors of the economy. The secretariat is supposed to re-work the programmes of the various states and find out how we are going to collaborate with ourselves to be able to bring out the best of the states and the best of the region. So, we are definitely going to support the Director-General and his team to be able to function better. Luckily for us, a lot of work had been done in the past and it is for us to be able to put that work into action and that’s exactly what we are doing.

Concerning security in our various states, we work very well with the various security agencies in our states – everybody knows this and somebody like the Inspector-General of Police has been talking about community policing, because the security agencies have realised that they can’t work effectively without the civil society or the civilians themselves. So, they have realised that this collaboration is in the best interest of our various states and in the best interest of our nation, and when we have worked out the details, we will approach Mr President and let him know what we are going to do. It’s not going to be a question of hyping what is going to be done, it’s going to be done in the best interest of the nation and in the best interest of the states of the South-South region and best for us, particularly as most of us also produce oil. It will also help us to secure our oil facilities the more. So it’s a holistic arrangement and that’s why we have asked the BRACED Commission to put this together very quickly and then we propose another meeting in which we are going to take the details of it and move on to see that what is right is done.

NDDC As A Unit Of Niger-Delta Ministry Is Dangerous For The Region’s Development – Stakeholders
Tribute: To My Friend, Mallam Abba Kyari by President Muhammadu Buhari
Advertisement