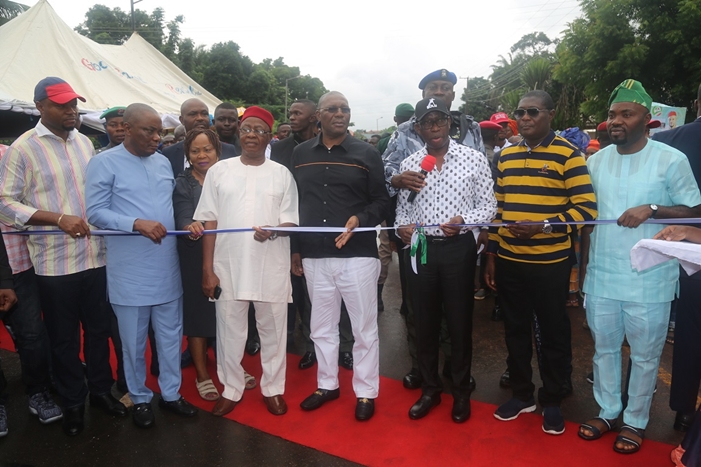 Delta State Governor, Senator Ifeanyi Okowa (3rd right) and Others during the Commissioning of the Rehabilitated Issele-Uku/Issele-Mkpitime/Onicha-Olona Road, in Aniocha-North L.G.A.

At each of the communities where the projects were commissioned, the people came out in their large numbers to appreciate Governor Okowa for executing people-oriented projects across the state.

“In keeping with our tradition that every promise made would be kept, these projects are projects delivered in good time,” the Governor  said, adding, “a lot has been done in the area of road construction, especially in Aniocha North, it is good to state that when government has done things that are noticeable, executed projects that are impactful on the people, the people should show appreciation for the government to be encouraged to do more.”

He commended the local contractors used in executing the projects asserting, “we will not relent in executing projects that will uplift the standard of living of the people, what we need is peaceful communities, the people should continue to partner with us, continue to support us to enable us do more.”

At the Palace of the Obi of Onicha-Ugbo, Agbogidi Chukwumalieze 1, Governor Okowa decried pockets of criminals that exists in the midst of the people and called on the people to fish out such criminals.

“We will continue to fight crime in our state, the communities should assist us by providing useful information about the criminals because we have noticed that some of the criminals are from outside the state,” he said.

While commending the traditional rulers in Aniocha North local government area for their cooperation, he urged them to continue to instill in their subjects the need to always avoid criminal activities.

Chairman of the local government council, Hon. Chuks Oseme had in an address, said; “there is no gainsaying the fact that excellent infrastructure is the backbone and chief driver of socio-economic development which every country strives to achieve and it is on this note that I would immensely appreciate you, the people-oriented Governor, Senator Dr Ifeanyi Okowa for you have continued to strive towards good governance, physical and human capital development and unity of Delta State.

The governor was accompanied by his Deputy, Deacon Kingsley Otuaro and other top government functionaries.