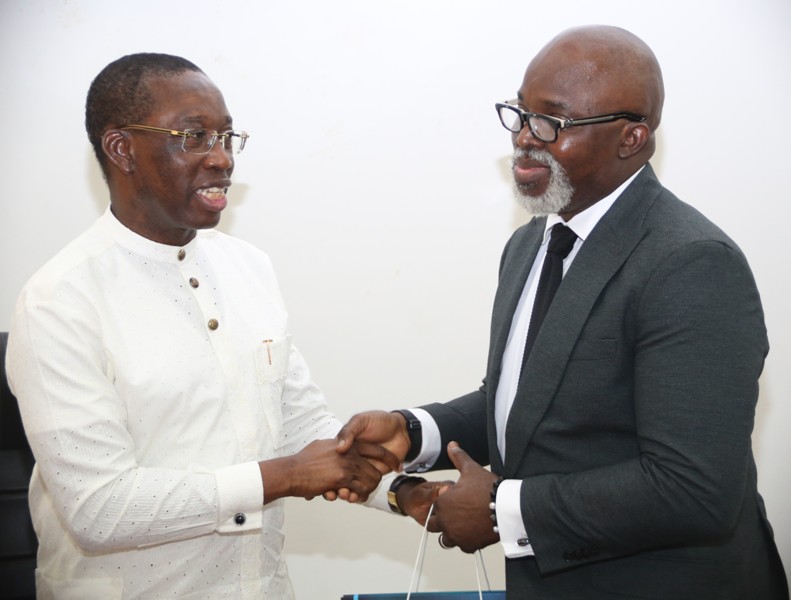 Delta State Governor, Senator Ifeanyi Okowa (left), and the President, Nigeria Football Federation (NFF), Mr Amaju Pinick during a courtesy call by the later on the Governor in his office in Asaba.

Delta State Governor, Senator Dr. Ifeanyi Okowa has advocated strong synergy between the Nigerian Football Federation (NFF) and the private sector to boost the development of the game from the grassroots level.

The governor made the call Wednesday, August 1, 2018 when the President of NFF, Mr. Amaju Pinnick led members of the football body to pay him a courtesy visit at Asaba.

According to the governor, “we believe that we have to develop football right from the beginning so that talents will not be wasted and I urge the NFF to develop a synergy with the private sector to encourage the discovery of local talents and sponsor football activities from the local to international levels.”

While urging members of NFF and sports loving Nigerians to “support Mr Pinnick to help Nigeria progress in sports,” Governor Okowa disclosed that his administration in partnership with the private sector has encouraged the development of Sports in the state by resuscitation the Principals Cup and of recent, Headmaster’s Cup football tournaments for Secondary and Primary Schools in the state.

“Sports help the youths to be healthy and strong,” the governor asserted, and thanked the NFF for coming to witness the 21st African Senior Athletics Championship (ASAC) tagged Asaba 2018.

Governor Okowa observed that while most countries were given period of time to prepare for such championships, Delta State had only one year to reconstruct the Stephen Keshi Stadium, put necessary facilities in place and organise the event.

Delta State Governor, Senator Ifeanyi Okowa (7th left), in a group photograph with the President, Nigeria Football Federation (NFF), Mr Amaju Pinick (6th left) and other members of the NFF President’s entourage during a courtesy call on the Governor in Asaba.

He commended the local organising committee for the championship for the successes recorded so far, disclosing that those athletes who were stranded at the Murtala Mohammed Airport, Lagos were as a result of increase in number of participating countries for the championship.

“All the athletes as at this morning have been airlifted to Asaba, initially, 46 countries enlisted to participate in the game, but, few days ago the number of countries increased to 52, we are excited that 52 countries are participating, we are a sports loving state and will be excited to host more world tournaments,” the governor said.

“The stadium will endure long after you have left office, it will be an everlasting legacy of your administration,” he added, noting, “I want to assure you that CAF will come to check and certify the stadium for international competitions and with the support of my executive committee, it will be possible.”