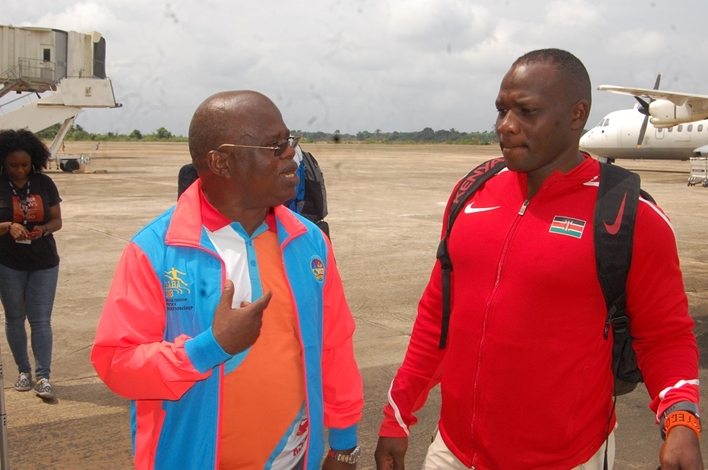 The last set of expected athletes at the 21st African Championship have all arrived in Asaba ahead of Wednesday’s Opening Ceremony.

Leading in the last set of athletes to the Delta State Capital was former World Champion in the Javelin Event, Julius Yego.

In a statement issued by Olukayode Thomas, Head of Media and Publicity for the African Championship, Yego who came in with Team Kenya said they were happy to finally be on the ground to compete with the rest of the continent.

While admitting that the past days have been hectic for Team Kenya and some few other countries, Yego who is one of the top names at this year’s championship said they would have to catch their breath fast and get ready for action.

Despite the glitches in their travel schedule, Team Kenya remain resolute in their plan to conquer the continent in Asaba.

Speaking on arrival at the Asaba Airport, the Leader for Team, Peter Mutai said they have gotten behind them their delayed travel to Asaba and are now focus on winning as many medals as possible.

“We are glad we are here now, as I said when we came for the DRM meeting we are coming to win as many medals as possible. Despite the hiccups here and there which of course it happens; especially with the number of People coming into Nigeria at the same time we are still focused on taking all the medals. This is a big team from Kenya, with almost 65 athletes and we are focused on what we came here to do.” Mutai stated.

Aside from Team Kenya, the remaining batches of athletes from Egypt, Cameroon, Sierra Leone, South Sudan among others all arrived on Wednesday.

The Asaba 2018 is a record-breaking event as 52 countries will be on parade for the next five days in the newly-completed Stephen Keshi Stadium.