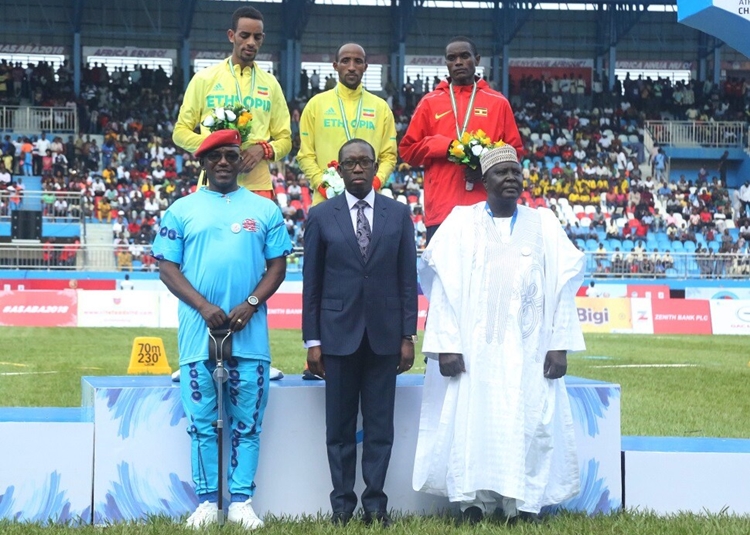 The much anticipated 21st African Senior Athletics Championship has officially begun at its host venue, the Stephen Keshi Stadium in Asaba Delta State with 52 African countries competing for laurels at the 5 days event.

The Championship which saw the first set of medals picked at the opening day, Wednesday, August 1, 2018, had Ethiopian, Jamal Mekonnen winning the first Gold medal in the 10,000 metres men’s race.

At the opening ceremony, Nigeria’s President, Muhammadu Buhari, Delta State Governor, Senator Dr. Ifeanyi Okowa and the President of International Association of Athletics Federation (IAAF), Lord Sebastian Coe and the President of the Confedration of African Athletics (CAA) Hamad Kalkaba Malboum urged athletes participating in the Championship, dubbed ‘Asaba 2018’ to harness the event to build friendship that will consolidate peace and unity in Africa.

According to the President Buhari whose address was read by the Minister of Sports and Youths Development, Mr Solomon Dalung, “Sports has become a veritable vehicle for friendship and building relationship among African nation.”

“If Africa must excel in sports, private bodies must be involved in the sponsorship of sports championship,” the President said and thanked Governor Okowa, the government and people of Delta State for hosting the championship on behalf of the country.

Buhari urged the Governor Okowa to keep the flag flying as his good works were highly appreciated.

Governor Okowa in a brief speech, thanked God that 52 African countries were in Asaba for the championship, stating, “I welcome all of you to Asaba and it is my prayer that you enjoy your 5-day stay. Championship of this nature is vital in building friendship.”

“It is a thing of joy that we have provided a befitting stadium for the championship, enjoy your stay in Asaba,” the governor asserted.

Lord Coe had commended Governor Okowa for providing a befitting venue for the championship, stating that the Stephen Keshi Stadium “is a legacy for generations to come.”

President of Confederation of African Athletics,  Hamad Malboum also, thanked Okowa for providing venue for the championship and urged athletes and officials participating in the events to respect the rules of the game.

Renowned musicians and fire works added colour to the opening ceremony which saw the 23, 000 capacity Stadium filled by spectators.